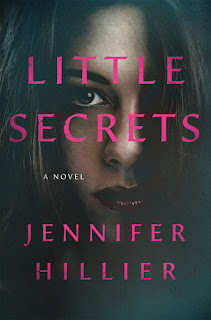 Overwhelmed by tragedy, a woman desperately tries to save her marriage in award-winning author Jennifer Hillier's Little Secrets, a riveting novel of psychological suspense.

All it takes to unravel a life is one little secret...

Marin had the perfect life. Married to her college sweetheart, she owns a chain of upscale hair salons, and Derek runs his own company. They're admired in their community and are a loving family—until their world falls apart the day their son Sebastian is taken.

A year later, Marin is a shadow of herself. The FBI search has gone cold. The publicity has faded. She and her husband rarely speak. She hires a P.I. to pick up where the police left off, but instead of finding Sebastian, she learns that Derek is having an affair with a younger woman. This discovery sparks Marin back to life. She's lost her son; she's not about to lose her husband, too. Kenzie is an enemy with a face, which means this is a problem Marin can fix.

Permanently.
Audiobook, 9 hours, 40 min
Published April 21st 2020
by Macmillan Audio
4/5 stars
Little Secrets is a parents worst nightmare. One second your child’s hand is firmly in yours and the next gone, 480 seconds is all it took. Now 400 plus days later Marin still relives those seconds over and over again.

I’m glad I went with the audio book for this one, Kirsten Potter is the reader who does a great job bringing this book to life.

Little Secrets is a multi layered story told from the POVs of two women. Marin being one, her character shines through with visits to support groups, a PI, work and friends. It’s full of secrets, relationships and deception. I can’t even begin to image what she went through and the author gave a clear picture of her emotional state that was realistic and relatable.

Kenzie is the other POV, the other woman with an agenda that gave this book a clear view of Marin's husband.  What kind of secrets are both these 2 playing at?
I’ve only read one book by Jennifer Hillier, Jars of Hearts (which I really enjoyed). While this one wasn’t as dark it was suspenseful with the twists and turns that kept me guessing and concluded with a satisfying ending.
Definitely a book I recommend to those that love to get lost in an addictive read.

Posted by Margaret @ JustOneMoreChapter at 10:37 PM