Review: The Book of Lost Names by Kristin Harmel 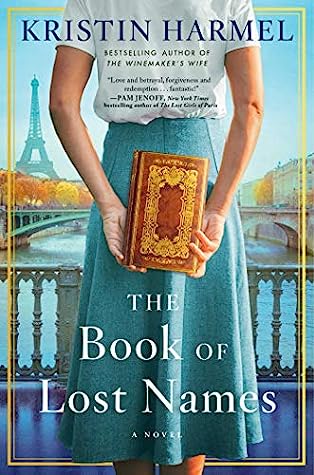 Inspired by an astonishing true story from World War II, a young woman with a talent for forgery helps hundreds of Jewish children flee the Nazis in this unforgettable historical novel from the international bestselling author of the “epic and heart-wrenching World War II tale” (Alyson Noel, #1 New York Times bestselling author) The Winemaker’s Wife.

Eva Traube Abrams, a semi-retired librarian in Florida, is shelving books one morning when her eyes lock on a photograph in a magazine lying open nearby. She freezes; it’s an image of a book she hasn’t seen in sixty-five years—a book she recognizes as The Book of Lost Names.

The accompanying article discusses the looting of libraries by the Nazis across Europe during World War II—an experience Eva remembers well—and the search to reunite people with the texts taken from them so long ago. The book in the photograph, an eighteenth-century religious text thought to have been taken from France in the waning days of the war, is one of the most fascinating cases. Now housed in Berlin’s Zentral- und Landesbibliothek library, it appears to contain some sort of code, but researchers don’t know where it came from—or what the code means. Only Eva holds the answer—but will she have the strength to revisit old memories and help reunite those lost during the war?

As a graduate student in 1942, Eva was forced to flee Paris after the arrest of her father, a Polish Jew. Finding refuge in a small mountain town in the Free Zone, she begins forging identity documents for Jewish children fleeing to neutral Switzerland. But erasing people comes with a price, and along with a mysterious, handsome forger named Rémy, Eva decides she must find a way to preserve the real names of the children who are too young to remember who they really are. The records they keep in The Book of Lost Names will become even more vital when the resistance cell they work for is betrayed and Rémy disappears.

An engaging and evocative novel reminiscent of The Lost Girls of Paris and The Alice Network, The Book of Lost Names is a testament to the resilience of the human spirit and the power of bravery and love in the face of evil.
Kindle Edition, 400 pages
Expected publication: July 21st 2020
by Gallery Books
4/5 stars
I love reading about strong women from the past, not just during the war but anytime. This book takes place during WW2 along with a few chapters in current time (but with no pandemic). There are a number of books that portray spies, those that infiltrate inner circles of the enemy, Book of Lost Names takes on a different view. Eva forges documents to help children escape Nazi terror, to keep them safe and give them a future. No spoiler, blurb says that. The process was intriguing, learning some of the tricks of the trade, educational and the risks was compelling.
This book is a story of Eva, her desire to not sit by but use her talents to help thousands of children escape France.  It's a realistic look at the times, to feel the heartache of what the citizens of France endured. Eva's mother is with her, I really felt for her. Her fear and confusion shines through, she ages so much that I can’t imagine what she is going through. The fear of what was happening, what the future holds when they planned and work so hard for the life they had and then taken away like that with just the clothes on their backs. Great character development!
Eva's passion to remember these children, to record them with the hope of reuniting families is evident and commendable. Whether that book actually exists, I'd like to believe it does.  The author notes highlight facts of the time, the forgers and sadly how many families were ripped apart.
Kristin Harmel has written a number of books now taking placing during WW2 (this is my 2nd), her knowledge of the time shines through. This is a book and author I recommend.
My thanks to the publisher (via Netgalley) for an advanced copy in exchange for an honest review.
Posted by Margaret @ JustOneMoreChapter at 3:00 PM