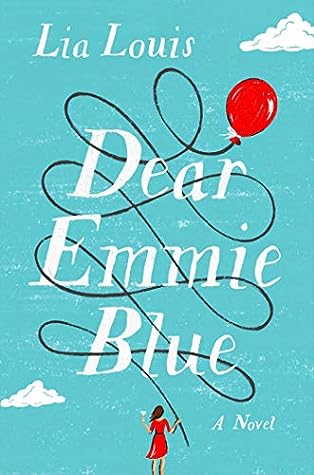 In this charming and poignant novel, teenager Emmie Blue releases a balloon with her email address and a big secret into the sky, only to fall head-over-heels for the boy who finds it; now, fourteen years later, the one thing Emmie has been counting on is gone for good, and everything she planned is up in the air.

At sixteen, Emmie Blue stood in the fields of her school and released a red balloon into the sky. Attached was her name, her email address…and a secret she desperately wanted to be free of. Weeks later, on a beach in France, Lucas Moreau discovered the balloon and immediately emailed the attached addressed, sparking an intense friendship between the two teens.

Now, fourteen years later, Emmie is hiding the fact that she’s desperately in love with Lucas. She has pinned all her hopes on him and waits patiently for him to finally admit that she’s the one for him. So dedicated to her love for Lucas, Emmie has all but neglected her life outside of this relationship—she’s given up the search for her absentee father, no longer tries to build bridges with her distant mother, and lives as a lodger to an old lady she barely knows after being laid off from her job. And when Lucas tells Emmie he has a big question to ask her, she’s convinced this is the moment he’ll reveal his feelings for her. But nothing in life ever quite goes as planned, does it?

Emmie Blue is about to learn everything she thinks she knows about life (and love) is just that: what she thinks she knows. Is there such thing as meant to be? Or is it true when they say that life is what happens when you are busy making other plans? A story filled with heart and humor, Dear Emmie Blue is perfect for fans of Eleanor Oliphant Is Completely Fine and Evvie Drake Starts Over.
Kindle Edition, 320 pages
Expected publication: July 14th 2020
by Atria/Emily Bestler Books
4.5/5 stars
Lia Louis is a new author for me. Dear Emmie Blue is her 2nd book, though for me it got off to a slow start, it turned into one of my favorites for 2020.
Emmie Blue is a complicated character, impulsive, insecure and a loyal friend.  At first I kinda thought meh but as I got to know her, meet her mother, friends and find out what made her tick I didn't just feel compassion but wanted to reach out and give her a hug and smack at the same time. Her upbringing shaped her in so many ways, as did her friendship with Lucas - finder of Emmie's balloon.
Dear Emmie Blue is a well-written coming of age story for a 30-year-old and that's a good thing.  As Emmie deals with things (the blurb doesn't specifically say what it is, so I won't either) she is forced to deal with the past as it takes her on a journey of self-discovery.  This journey was a pleasure to read as the author wove the past with the present seamlessly. It's a book that made me smile, laugh and shed a few tears. There were serious issues relevant today there are triggers as well as healing.
Though some things might be predictable it was a pleasure to read about Emmie. Lia Louis's debut, Somewhere Close to Happy is already in my TBR pile and I look forward to what she has coming out next.
My thanks to the publisher for an advanced digital copy (via Netgalley) in exchange for an honest review.

Posted by Margaret @ JustOneMoreChapter at 12:13 AM