Review: Across the Winding River by Aimie K. Runyan 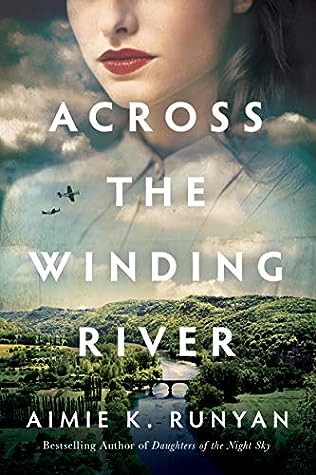 A woman unlocks the mystery of her father’s wartime past in a moving novel about secrets, sacrifice, and the power of love by the bestselling author of Daughters of the Night Sky.

Beth Cohen wants to make the most of the months she has left with her elderly father, Max. His only request of his daughter is to go through the long-forgotten box of memorabilia from his days as a medic on the western front. Then, among his wartime souvenirs, Beth finds a photograph of her father with an adoring and beautiful stranger—a photograph worth a thousand questions.

It was 1944 when Max was drawn into the underground resistance by the fearless German wife of a Nazi officer. Together, she and Max were willing to risk everything for what they believed was right. Ahead of them lay a dangerous romance, a dream of escape, and a destiny over which neither had control.

But Max isn’t alone in his haunting remembrances of war. In a nearby private care home is a fragile German-born woman with her own past to share. Only when the two women meet does Beth realize how much more to her father there is to know, all the ways in which his heart still breaks, and the closure he needs to heal it.
Kindle Edition, 301 pages
Expected publication: August 1st 2020
by Lake Union Publishing
4/5 stars
Aimie K. Runyan has long been a go-to author for me.  First introduced with her Canadian HF Series, Daughters of New France, I've watched her transition to WW2 HF with her last few releases.  She is one of the few authors that I've managed to keep up-to-date with each new book.
Across the Winding River is new ground with 3 story-lines and characters that overlap, it might sound overwhelming but it isn't.  Taking place in Germany during the war I was treated to a view of sisters, strong sisters, sisters with secrets that if they came to light could (and most likely) have deadly consequences.  It was a glimpse at what life was like for those that didn't willing follow to Hitler.
I always find the author's writing engaging, well researched and opens my mind to parts of history I'm unfamiliar with. Across the Winding River is a story of love and loss, taking risks and perseverance. Another entertaining read and one I recommend.
My thanks to Lake Union Publishing (via Netgalley) for an advanced digital copy in exchange for an honest review. Posted by Margaret @ JustOneMoreChapter at 11:52 PM