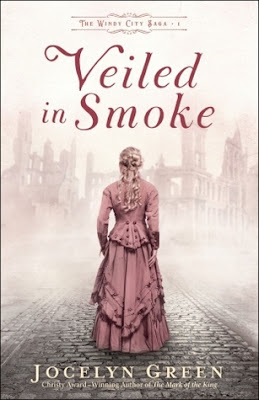 Meg and Sylvie Townsend manage the family bookshop and care for their father, Stephen, a veteran still suffering in mind and spirit from his time as a POW during the Civil War. But when the Great Fire sweeps through Chicago's business district, they lose much more than just their store.

The sisters become separated from their father, and after Meg burns her hands in an attempt to save a family heirloom, they make a harrowing escape from the flames with the help of Chicago Tribune reporter Nate Pierce. Once the smoke clears away, they reunite with Stephen, only to learn soon after that their family friend not only died during the fire--he was murdered. Even more shocking, Stephen is charged with the crime and committed to the Cook County Insane Asylum.

Though homeless, injured, and suddenly unemployed, Meg must not only gather the pieces of her shattered life, but prove her father's innocence before the asylum truly drives him mad.

Ever since reading The Mark of the King, Jocelyn Green has become one of my go-to authors.  She writes her books around real historical events that haven't been getting much attention.

Coming in at 400 pages there is great detail to the aftermath of The Great Fire, not all of it necessary but it did paint a picture of what life was like, the struggles that were encountered with the winter approaching.

But it wasn’t just about the fire, it was about people struggling with their own internal demons. It’s about PTSD back when it was called a Soldier Heart, the treatment and social stigma that went with it. It’s the story of two sisters, who run a bookshop, searching for love and meaning. When the dust settles it’s also about a murder and the search for truth.

Once again Jocelyn Green has done extensive research and written a compelling story based on historical events. I love how she has taken me off the beaten path with a unique book that appears to be the first in The Windy City Saga. Released last month it is readily available in all formats.


This book was part of my 2020 reading off my shelf challenge.

Posted by Margaret @ JustOneMoreChapter at 3:22 PM