Review: Recipe for a Perfect Wife by Karma Brown 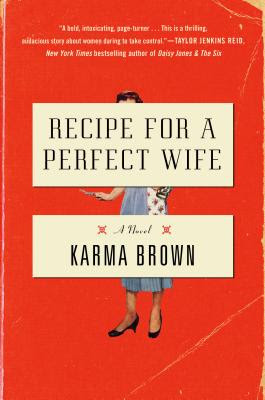 " Recipe for a Perfect Wife is a bold, intoxicating, page-turner. Karma Brown has long been a favorite of mine and this book is proof she just keeps getting better and better. This is a thrilling, audacious story about women daring to take control."--Taylor Jenkins Reid, New York Times bestselling author of Daisy Jones and the Six

When Alice Hale reluctantly leaves a promising career in publicity, following her husband to the New York suburbs, she is unaccustomed to filling her days alone in a big, empty house. However, she is determined to become a writer--and to work hard to build the kind of life her husband dreams of, complete with children.

At first, the old house seems to resent Alice as much as she resents it, but when she finds an old cookbook buried in a box in the basement, she becomes captivated by the cookbook's previous owner: 1950s housewife Nellie Murdoch. As Alice cooks her way through the past, she begins to settle into her new surroundings, even as her friends and family grow concerned that she has embraced them too fully: wearing vintage dresses and pearls like a 1950s housewife, making elaborate old-fashioned dishes like Baked Alaska, and drifting steadily away from her usual pursuits.

Alice justifies the changes merely as research for her novel...but when she discovers that Nellie left clues about her own life within the cookbook's pages--and in a mysterious series of unsent letters penned to Nellie's mother--she quickly realizes that the housewife's secrets may have been anything but harmless. As she uncovers a more sinister side to Nellie's marriage and with pressure mounting in her own relationship, Alice realizes that to protect herself she must harbor and hatch a few secrets of her own...

I think this is the 3rd book I've read so far this year from the 1950s, I'm not complaining, in fact, I rather enjoy it.  Women are still the minority with the role of housewife front and center, pity the woman who thinks otherwise.

Dual time periods are still my favorite.  Getting a taste of 2 stories and seeing what connects them, going on the journey alongside and seeing if I can undercover clues along the way.  With this book, I enjoyed the format.  Chapters that belong to Nellie back in 1952 usually start with sayings/quotes that one must take as comical (even though sad).


"Don't expect your husband to make you happy while you are simply a passive agent.  Do your best to make him happy and you will find happiness yourself. - Blanche Ebbutt, Don'ts for Wives (1913)"

With old magazines and a cookbook connecting these two women, add in an unsettling house Recipes was an engaging story.  Even though I wasn't really a fan of the characters that doesn't mean the book didn't work.  This is my first time reading Karma Brown and cant wait to read more.


This book was part of my 2020 Reading Off My Shelf Challenge (book 14).
Posted by Margaret @ JustOneMoreChapter at 12:00 PM

Email ThisBlogThis!Share to TwitterShare to FacebookShare to Pinterest
Labels: 2020, 2020 Reading off my shelf, Canadian Author, Karma Brown, Met author, New to me author