Review: The Glovemaker by Ann Weisgarber 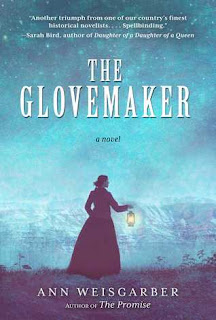 In the inhospitable lands of the Utah Territory, during the winter of 1888, thirty-seven-year-old Deborah Tyler waits for her husband, Samuel, to return home from his travels as a wheelwright. It is now the depths of winter, Samuel is weeks overdue, and Deborah is getting worried.

Deborah lives in Junction, a tiny town of seven Mormon families scattered along the floor of a canyon, and she earns her living by tending orchards and making work gloves. Isolated by the red-rock cliffs that surround the town, she and her neighbors live apart from the outside world, even regarded with suspicion by the Mormon faithful who question the depth of their belief.

When a desperate stranger who is pursued by a Federal Marshal shows up on her doorstep seeking refuge, it sets in motion a chain of events that will turn her life upside down. The man, a devout Mormon, is on the run from the US government, which has ruled the practice of polygamy to be a felony. Although Deborah is not devout and doesn’t subscribe to polygamy, she is distrustful of non-Mormons with their long tradition of persecuting believers of her wider faith.

But all is not what it seems, and when the Marshal is critically injured, Deborah and her husband’s best friend, Nels Anderson, are faced with life and death decisions that question their faith, humanity, and both of their futures.

I’ve been spending a lot of time lately in WW II HF that I’ve ventured off to other eras and locations for the time being. Utah in the 1880’s is heavy with Mormons, the aftermath of the Mountain Massacre and killing of its leader, Joseph Smith, leaves a bitter taste for some. In a little place called Junction a late night caller sets in motion a series of events with everlasting consequences.

I will admit at the beginning wondering if this book was for me. First off I was excited when the first chapter featured a male POV, it's not common so when it happens I get excited. Of course, the whole book was divided between his (Nels) and Deborah’s story. Why was I a bit iffy you ask, well I found the first female chapter a little repetitive with the same feelings, emotions repeating itself.  I found myself casing judgment on Deborah's character before really getting to know her. As the story progressed those feelings quickly disappeared. It wasn’t just a story of what was happening in the now but memories resurfaced where I got to know both Deborah and Nels better. How they ended up in this little place with few neighbors and away from Mormon communities. The author wove those jumps in time seamlessly, with an ease that made this story flow at a nice pace.

The Glovemaker is a unique mystery, it’s a story of survival, hope, and faith. Ann Weisgarber is a new author to me with her previous books now gracing my tbr pile. Definitely a book I recommend, especially to those that like a good historical mystery off the beaten path.

My thanks to the publisher (via Netgalley) for an advanced copy in exchange for honest review.
Posted by Margaret @ JustOneMoreChapter at 12:30 AM