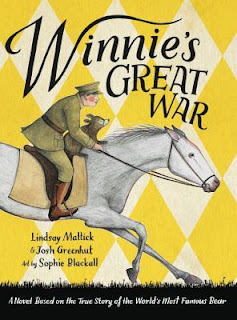 A wartime adventure unfolds through the eyes of the world’s most beloved Bear.

The story of the real bear that inspired Winnie-the-Pooh has been capturing readers’ imaginations since the publication of the Caldecott Medal award-winning picture book, Finding Winnie.

But there was so much left to be told – not just about Winnie, but about the great world events she witnessed. Now, the creative team behind the bestselling picture book has reunited to bring you Winnie’s Great War.

In a triumphant blending of deeply researched history and magnificent imagination, we follow our irrepressible Bear on her journey -- from her infancy in the woods of Ontario, to her unlikely friendship with Captain Harry Colebourn and her time as the mascot of the Second Canadian Infantry Brigade, to her experiences in wartime London before she met Christopher Robin Milne.

Told in beautifully crafted language and infused with Sophie Blackall’s irresistible renderings of an endearing bear, the book is also woven through with actual entries from Captain Harry Colebourn’s wartime diaries. The result is a one-of-kind exploration of the realities of war, the meaning of courage, and the indelible power of friendship, all told through the historic adventures of one extraordinary bear.

Winnie’s Great War is the story of Winnie the Pooh told by the great great grandson of Lt Harry Colebourn, the man who found a lone bear cub.

In the middle of the Woods was a tree, and at the bottom of the tree was a hole, and out of the hole poked a big black pad of a nose, which sniffed the air to see whether anyone was around.


Beginning in Winnipeg, traveling across Canada to England this is an endearing story of the famous bear beloved by many. I’ll confess to not knowing his story - weird right!?

I loved the illustrations throughout this book as well as actual photos and other historical facts. Winnie had a voice here as well as other animals which were a nice touch, though a little confusing as to who was speaking at times, but not enough to ruin my enjoyment of this little gem.

A great little book, perfect for bedtime storytime for all ages.

My copy from personal library and part of my ‘reading off my shelf challenge’
Posted by Margaret @ JustOneMoreChapter at 9:29 PM