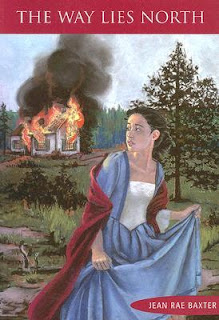 This young adult historical novel focuses on Charlotte and her family, Loyalists who are forced to flee their home in the Mohawk Valley as a result of the violence of the 'Sons of Liberty' during the American Revolution.

At the beginning, fifteen-year-old Charlotte Hooper and her parents begin the long trek north to the safety of Fort Haldimand (near present-day Kingston). The novel portrays Charlotte's struggle on the difficult journey north, and the even more difficult task of making a new home in British Canada.

In the flight north, the Mohawk nation plays an important role, and Charlotte learns much about their customs and way of life, to the point where she is renamed 'Woman of Two Worlds.'

Later in the novel, she is able to repay her aboriginal friends when she plays an important part in helping the Oneidas to become once again members of the Iroquois confederacy under British protection. Strong and capable, Charlotte breaks the stereotype of the eighteenth-century woman, while revealing a positive relationship between the Loyalists and aboriginal peoples.

Canadian historical is a favorite of mine and a genre I plan to read more of this year. It was through a kid-lit writing course I took last year that I was introduced to Jean Rae Baxter. A Canadian author who has written a series of books taking place during the early year of this great nation.

Introduced to Charlotte, a 15-year-old Loyalist in 1777, who along with her parents flee to the north during the American Revolution. This book is geared for middle grade and up, it gives the young reader a look at what those loyal to the King endured in his name. It’s realistic, believable and appears to stay true to history. It’s a tough journey these three take, with many obstacles and setbacks along the way.  The role of the Mohawks and Oneida plays out nicely as well.

The author has penned 3 other books with other characters introduced here, ones I am looking forward to reading about.


This book is part of my 2019 reading off my shelf challenge (1).
Posted by Margaret @ JustOneMoreChapter at 11:14 PM