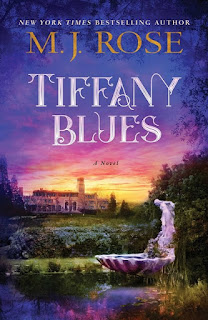 Twenty‑four‑year‑old Jenny Bell is one of a dozen burgeoning artists invited to Louis Comfort Tiffany’s prestigious artists’ colony. Gifted and determined, Jenny vows to avoid distractions and romantic entanglements and take full advantage of the many wonders to be found at Laurelton Hall.

But Jenny’s past has followed her to Long Island. Images of her beloved mother, her hard-hearted stepfather, waterfalls, and murder, and the dank hallways of Canada’s notorious Andrew Mercer Reformatory for Women overwhelm Jenny’s thoughts, even as she is inextricably drawn to Oliver, Tiffany’s charismatic grandson.

As the summer shimmers on, and the competition between the artists grows fierce as they vie for a spot at Tiffany’s New York gallery, a series of suspicious and disturbing occurrences suggest someone knows enough about Jenny’s childhood trauma to expose her.

Supported by her closest friend Minx Deering, a seemingly carefree socialite yet dedicated sculptor, and Oliver, Jenny pushes her demons aside. Between stolen kisses and stolen jewels, the champagne flows and the jazz plays on until one moonless night when Jenny’s past and present are thrown together in a desperate moment, that will threaten her promising future, her love, her friendships, and her very life.


Opening line: I lost my heart long before this fire darkened its edges.

M.J. Rose has been a favorite of mine since reading Seduction about 5 years ago. She knows how to write unique plots with snapshots of real historical places, with characters that are hurting and struggling to hide secrets of the pasts. It’s always a treat opening one of her books. Due to time restraints, I opted for the audio version of Tiffany Blues.

The book opened in 1957 when a fire destroyed the famous Tiffany mansion in Long Island (it's a fact, google it, I did). There was enough in that opening that had me intrigued and curious about this place. The biggest surprise was the location of Hamilton, Ontario playing a pivotal role in Jenny’s past. That’s my neck of the woods (well close enough). One can’t help feeling for Jenny and all she went through, but trying to live a life without the past catching up is hard.

Tiffany Blues is a mysterious story with romance and the historical elements I love. The story goes back and forth to Jenny’s past and 1924, both of which were interesting enough, but I kinda felt it lacked the depth of character development from Rose’s previous books. That being said Jenny was well developed but I would have loved to have known some of the others in this book a little better, like Minx especially.

Coming in at just over 10 hours it was a quick listen with the reader Tavia Gilbert doing a great job. Author notes are always a favorite of mine especially for historical fiction, they were included here and I liked the fact it was at the beginning before the story began.


My thanks to the publisher for an advanced copy, however, I went the audio route via Sribd.
Posted by Margaret @ JustOneMoreChapter at 10:30 PM