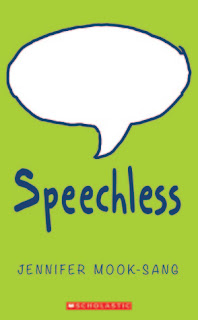 Jelly is as surprised as anyone when he decides that he’s going to win the annual sixth grade speech contest.

Just like that, Joe Alton Miles, better known as Jelly (because his initials are J.A.M. and his best friend’s are P.B.), is faced with overcoming not only his terror of being in the spotlight, but also the wrath of smart, popular Victoria, who believes that the prize (like all prizes) is rightfully hers. At first, Jelly only cares about winning the awesome prize (a new tablet), but as Victoria escalates her campaign against him, Jelly begins to realize that it’s not only the prize that’s at stake, but also his reputation, his self-respect and the friendship he values most. Jelly must dig deep inside himself to find out if he’s strong enough to stand up to Victoria and show everyone what he’s really capable of.

Hilariously funny and just as poignant, Speechless is about finding out who your friends are, giving back, standing up to bullying and finding your own unique voice

I was introduced to this book and author during a writing class I was taking on Kid Lit. Though I have always been a lover of MG & YA Books, this was one I was unfamiliar with. It was great to meet the author and listen to her talk about her writing process and how Speechless came to be.

Speechless was such a fun read. It was a funny, a quirky story about a boy named Jelly. It’s a clever situation that gets the story rolling and the momentum is solid throughout this book. Armed with ambition and determination Jelly grows and learns a lot as he strives to win this contest. From food bank education, stepping out of ones comfort zone and good old fashioned guts Jelly works towards his goal even with the stumbling blocks he encounters.

Speechless is a story of bullying, friendship and discovering one self, presented in a way to keep middle grade kids attention and even entertaining for this adult.

Paperback book from my personal library
Posted by Margaret @ JustOneMoreChapter at 1:58 PM