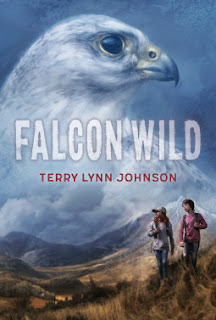 "I back up as Cooper did and then sprint toward the edge. Just as I'm about to launch myself across the crevice, a hot wave of nausea grips me. I stumble at the last second. My leap is not enough to propel me to the other side. I reach for the edge.

Thirteen-year-old Karma is lost in the backcountry of Montana with her falcon, Stark, and a runaway boy named Cooper. She's desperate to find help for her dad and brother after they find themselves in a terrible accident on a back road.

Karma wouldn't be in this mess if her parents hadn't insisted on returning Stark to the bird's original owner. Life at her father's bird sanctuary--and Karma's dreams of becoming an apprentice falconer--will never be the same now that she has to give Stark back. Lost in the wild, her bond with the tamed falcon only grows stronger. All the while, Cooper gets his own lessons on how to trust in newfound friendship.

Both Karma's and Cooper's mettle is tested by mountain terrain, wild animals, severe weather, injury, and their own waning hope as this edge-of-your-seat adventure story vividly portrays the special bonds that can form between humans and animals.

I used to use the excuse that I read middle grade and children's book to see what would appeal to my boys and as time went by for the grandkids.  But the plain truth is that I love these books and I don't read nearly enough of them.  Now mind you I do have boundaries, not being a fan of fantasy or sci-fi, I am always on the lookout for adventure type story's, ones that feature the great outdoors and coming of age themes.  So when I discovered Canadian author Terry Lynn Johnson I knew I'd hit gold.

Beginning with Ice Dogs and Dogsled Dreams I have been avidly waiting for more great stories.  Imagine my shock in discovering Falcon Wild months after it's release. (I read this last fall and realized I never posted my review).  One of the things that stands out for me is the author's love of nature, it shines through in her writing.  With Falcon Wild it wasn't just about a couple of kids lost in the wilderness, I was given a glimpse of the beauty and harshness of the environment.  The feelings of hope and hopelessness,  respect and appreciation of animals and nature shine through.  Karma and Copper are challenged on many levels and I enjoyed reading about it.  The lessons on falconry were fun and educational.

Terry Lynn Johnson has a wonderful blog that highlight not just her books but where she draws inspiration.  Check it out at TerryLynnJohnson.com

My print copy from personal library.
Posted by Margaret @ JustOneMoreChapter at 9:57 PM