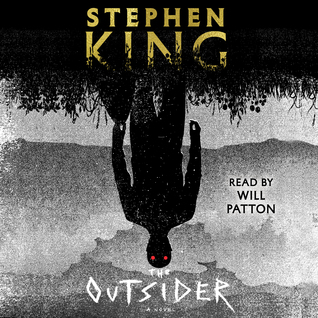 An unspeakable crime. A confounding investigation. At a time when the King brand has never been stronger, he has delivered one of his most unsettling and compulsively readable stories.

An eleven-year-old boy’s violated corpse is found in a town park. Eyewitnesses and fingerprints point unmistakably to one of Flint City’s most popular citizens. He is Terry Maitland, Little League coach, English teacher, husband, and father of two girls. Detective Ralph Anderson, whose son Maitland once coached, orders a quick and very public arrest. Maitland has an alibi, but Anderson and the district attorney soon add DNA evidence to go with the fingerprints and witnesses. Their case seems ironclad.

As the investigation expands and horrifying answers begin to emerge, King’s propulsive story kicks into high gear, generating strong tension and almost unbearable suspense. Terry Maitland seems like a nice guy, but is he wearing another face? When the answer comes, it will shock you as only Stephen King can.

I jumped at the chance to listen to this one in audio format when I realized Will Patton was the reader. He was also the reader for the Mr. Mercedes trilogy and he did a great job. I’ve heard other readers mention this so I will also remind anyone interested in this book that you should read the Mr Mercedes series first or if you have no intention of reading that series then jump right in (and that's all I'll say about it).

This book comes in at over 18 hours long, equivalent to about 561 pages. The blurb above does a great job outlining what this book is about. I found this to be a easy read even for the amount of pages, the chapters are short and to the point, the characters are authentic, the plot intriguing and the conclusion fitting - even if a little rushed.

Though I found the characters authentic there were a number of them and at times I found myself a little overwhelmed, but that could just be the audio version and my mind not paying close enough attention.

I am not a fan of horror and books that are heavy into supernatural stuff, so I’ve always shied away from Stephen King but I’ve found some of his books appeal to me these days, they have the mystery and suspense I enjoy.

Though I recommend The Outsider be warned that there are some graphic crime scene parts and hard to read.


Audiobook through Scribd
Posted by Margaret @ JustOneMoreChapter at 12:30 AM