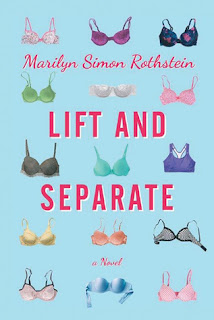 Marcy Hammer’s life has been turned upside down. Her husband, the head of a global brassiere empire, didn’t think twice about leaving her after thirty-three years of marriage for a 32DD lingerie model. Now Harvey the Home-Wrecker is missing in action, but Marcy’s through thinking about what a cliché he is. What she needs now is a party-size bag of potato chips, a good support system, and a new dress.

Striking out on her own is difficult at first, but Marcy manages to find traces of humor in her heartbreak. Even while devastated by Harvey’s departure, she still has her indomitable spirit and her self-respect. She has no intention of falling apart, either, even when her adult children drop a few bombshells of their own and she discovers a secret about her new, once-in-a-lifetime friend. Life may be full of setbacks, but by lifting herself up by her own lacy straps, Marcy just may be able to handle them all.

Sometimes you just need a good chick lit book once in a while. One that has a spunky character, some humor, and an interesting story.

Lift and Separate is the perfect beach book coming in at almost 300 pages, it is a relatively quick read but far from boring. After 33 years of marriage Marcy is on her own. Her kids are grown and leading their own lives. With a perfect blend of drama, wit and soul-searching Marcy decides to put herself first for a change.

Told from Marcy's perspective there is more than just her husband leaving here, her mother has an accident which develops into something more, a friendship develops, which helps during all this chaos.

Lift and Separate kept me entertained, the characters had depth and the plot, though serious, was dealt with in a authentic manner. Aside from the cover, which I'm not a fan of and might not have picked this up on my own if I saw, this is a book I would definitely recommend.

Thanks to TLC Tours for a print copy in exchange for honest review.

For more than twenty-five years, Marilyn Simon Rothstein owned an advertising agency in Connecticut. Lift And Separate, released by Lake Union Publishers, is her debut novel.

Her second novel, also contemporary women’s fiction, will be published in December 2017