Review: High As the Heavens by Kate Breslin 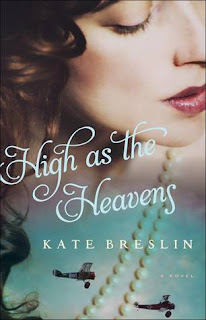 In 1917, Evelyn Marche is just one of many women who has been widowed by the war. A British nurse trapped in German-occupied Brussels, she spends her days working at a hospital and her nights as a waitress in her aunt and uncle's café. Eve also has a carefully guarded secret keeping her in constant danger: She's a spy working for a Belgian resistance group in league with the British Secret Service.

When a British plane crashes in Brussels Park, Eve is the first to reach the downed plane and is shocked to discover she recognizes the badly injured pilot. British RFC Captain Simon Forrester is now a prisoner of war, and Eve knows he could be shot as a spy at any time. She risks her own life to hide him from the Germans, but as the danger mounts and the secrets between them grow, their chance of survival looks grim. And even if they do make it out alive, the truth of what lies between them may be more than any love can overcome.

I will be honest here and say it was the cover that drew me towards this book. I have a thing for airplanes on covers, it evokes a feeling of intrigue and mystery with a spy element even before I knew what this book was about.

Evelyn Marche is a British Red Cross nurse living in Belgium during World War One. It was after her husband's plane is shot down that she returns to her family from England. The first bit of the book I found a little flat as it gave us her background and relationship with her husband. It was interesting enough and set the stage, it also gave me the chance to get to know Evelyn but it lacked something. Once the pace picked up and events started to unfold in Belgium, I was hooked.

This is my first time reading a book from this location and time period. While the war played out here I feel the book centered more around Evelyn and this mysterious pilot. Now don't get me wrong there was enough that I was able to feel the tension in Belgium and the workings of the resistance group, as well as get a general feel and sense of the danger for those in German occupied Belgium. A small part took place in France as well.

This is my first time reading a book by Kate Breslin and I was impressed. I think I read the last half in a day as the action peaked and I was anxious to find out what would happen. High as the Heavens is the kind of Christian fiction I enjoy reading, it is the story of forgiveness, family and faith. Of overcoming guilt and not having to carry your burdens by yourself. Definitely a book I recommend.


Book has been provided courtesy of Baker Publishing and Graf-Martin Communications Inc.
Posted by Margaret @ JustOneMoreChapter at 4:06 PM