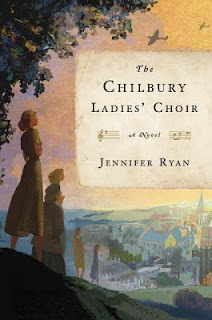 "Just because the men have gone to war, why do we have to close the choir? And precisely when we need it most!"

As England enters World War II's dark early days, spirited music professor Primrose Trent, recently arrived to the village of Chilbury, emboldens the women of the town to defy the Vicar's stuffy edict to shutter the church's choir in the absence of men and instead 'carry on singing'. Resurrecting themselves as "The Chilbury Ladies' Choir", the women of this small village soon use their joint song to lift up themselves, and the community, as the war tears through their lives.

Told through letters and journals, The Chilbury Ladies' Choir moves seamlessly from budding romances to village intrigues to heartbreaking matters of life and death. As we come to know the struggles of the charismatic members of this unforgettable outfit -- a timid widow worried over her son at the front; the town beauty drawn to a rakish artist; her younger sister nursing an impossible crush and dabbling in politics she doesn't understand; a young Jewish refugee hiding secrets about her family, and a conniving midwife plotting to outrun her seedy past -- we come to see how the strength each finds in the choir's collective voice reverberates in her individual life.

In turns funny, charming and heart-wrenching, this lovingly executed ensemble novel will charm and inspire, illuminating the true spirit of the women on the home front, in a village of indomitable spirit, at the dawn of a most terrible conflict.


Hardcover, 384 pages
Published February 14th 2017
by Crown Publishing Group
*****
This book is told through letters, journals and the odd poster. One would think that it would be hard to get invested in the story that jumps back-and-forth this way or that it would be difficult to get to know the characters. But the author made it work here and it was brilliant, heartwarming and a clear picture of the ladies in this little town who are left when most of the men went off to war.


As the women are left to fill in roles that the men usually did, some reluctantly, it's when the war hits close to home  that everyone's true character comes to light. I won't go into detail about each of the different characters suffice to say that there were coming of age stories, romance where least expected, hearts softened and of course there are those that took advantage of the situation. This is war so there is also heartbreak and devastation.

I think the author did a great job with this book, I was able to get to know the characters in fact I would like to continue hearing about their story and Chilbury during the rest of the war. Given the seriousness of World War II this book begins before the Battle of Britain where everyone thinks it will be over soon. The author was able to write a vivid story with wit and humour to offset the seriousness and show a realistic glimpse of a small town and the effects this war had on them. She made me care about the characters so much so that I hated to see the book end. From teenagers to retired women coming together in support, encouragement and to engulf each other in love and support it was a pleasure to read.


Since this is Jennifer Ryan's debuted I can't wait to see what she comes up with next and would be thrilled with a sequel. Definitely a book I highly recommend, especially to those that loved Letters from Skye and The Guernsey Literary and Potato Peel Pie Society.


Thank you to TLC Tours for inviting me to be part of this tour.  My arc was provided by the publisher (via netgalley).

Jennifer Ryan lives in the Washington, D.C., area with her husband and their two children. Originally from Kent and then London, she was previously a nonfiction book editor.