Review: The Confessions of Young Nero by Margaret George 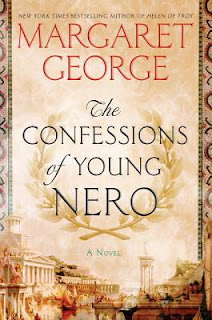 The New York Times bestselling and legendary author of Helen of Troy and Elizabeth I now turns her gaze on Emperor Nero, one of the most notorious and misunderstood figures in history.

Built on the backs of those who fell before it, Julius Caesar's imperial dynasty is only as strong as the next person who seeks to control it. In the Roman Empire no one is safe from the sting of betrayal: man, woman or child.

As a boy, Nero's royal heritage becomes a threat to his very life, first when the mad emperor Caligula tries to drown him, then when his great aunt attempts to secure her own son's inheritance. Faced with shocking acts of treachery, young Nero is dealt a harsh lesson: it is better to be cruel than dead.

While Nero idealizes the artistic and athletic principles of Greece, his very survival rests on his ability to navigate the sea of vipers that is Rome. The most lethal of all is his own mother, a cold-blooded woman whose singular goal is to control the empire. With cunning and poison, the obstacles fall one by one. But as Agrippina's machinations earn her son a title he is both tempted and terrified to assume, Nero's determination to escape her thrall will shape him into the man he was fated to become, an Emperor who became legendary.

With impeccable research and captivating prose, The Confessions of Young Nero is the story of a boy's ruthless ascension to the throne. Detailing his journey from innocent youth to infamous ruler, it is an epic tale of the lengths to which man will go in the ultimate quest for power and survival.

Margaret George is synonymous with epic historical door stopper sized books. If you want a quick fluffy read don't look here. But if you're looking for something that is meaty with grit, rich in history with depth, intrigue as well as a setting steeped in political and cultural mayhem you've come to the right place.

I have read everything that Margaret George has written though I've done it in audio book format this being my first time reading one of her books. Her books are usually close to a thousand pages in length or over 40 hours in audio. I will admit to a bit of puzzlement when I realized this book came in at only 528 pages, thankfully discovering Nero's life will be done in 2 parts, hopefully the wait for book 2 won't be too long.

I know nothing about the historical figure Nero which made this all the more enjoyable. The Confessions of Young Nero begins when he is a very young child. Watching him grow up in the environment he was in made it all the easier to connect with him and to really get a sense of who he was turning into. To understand what made him tick and why.

As always Margaret George captured the essence of Rome here, I loved how Paul of Tarsus made an appearance as well as the earthquake in Pompeii, even the fight for Britain with Boudicca showed the far reaches of his empire.  While at times more interested in the arts Nero was a very interesting character and I can't wait for the conclusion to his story.

“Extensively researched with the highest integrity, and deeply engaging, it sets a new benchmark for the genre.”—New York Times bestselling author Alison Weir

“George leaves us with the most coveted prize of fiction: a world. . . we wished existed, and that thoroughly does between the covers.” —Chicago Tribune
Posted by Margaret @ JustOneMoreChapter at 7:44 PM