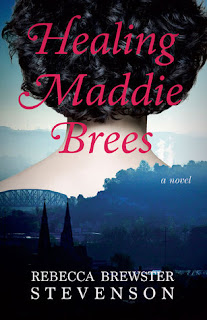 A debut novel from a promising new voice in fiction, Healing Maddie Brees is the story of a marriage and the memories that pit themselves against it, of the uncanny power of the body in both disease and desire, and of whether true healing ever really happens.

Maddie Brees has been given bad news: She is seriously ill. But she also has an old friend, an ex-boyfriend who might be able to heal her. She was witness to Vincent Elander’s so-called miracles in the past. But that was a long time ago, a memory that she would rather stay buried.

Now she is happily married to Frank and mother of their three young boys. The religion of her past is behind her, along with any confidence she once had in it. With the onset of her cancer, the memories of Vincent won’t leave Maddie alone, and before long they are affecting everything else: her marriage, her husband, the things they thought they agreed on, the beliefs they thought they shared. Soon Frank, who was to be Maddie’s rock throughout her treatment, is finding fault-lines of his own. In this exquisitely written narrative, Stevenson explores the questions of honesty and commitment, of disease and isolation, and of the many shapes healing takes.

When Maddie is diagnosed with breast cancer and begins treatment she reflects back to her life and a past she would just as soon not revisit.  Recalling her experiences with organized religion and her friendship with Vincent and Justice took up much of this story.  Frank also goes back in time as he struggles while trying to support his wife through this difficult time.

This was very much a 'tell' book, with both Maddie and Frank recalling their life.  Usually I am not a big fan, I like the 'show' part of any story, where you can connect and really get to know the characters.  With Healing Maddie Brees it did really work, I was able feel the emotion this story invoked. While I found the writing style mesmerizing and at first hard to down I did find it to be a little repetitive a number of times and drag a little here and there.

When I first starting this book I thought it was Christian fiction, but as it progressed and I finished it is a fiction book with strong religious elements.

Saving Maddie Brees is a solid debut for Rebecca Brewster Stevenson, my thanks to the publisher for an advanced copy for review purposes.

Posted by Margaret @ JustOneMoreChapter at 11:28 AM