Review: The Secrets of Flight by Maggie Leffler 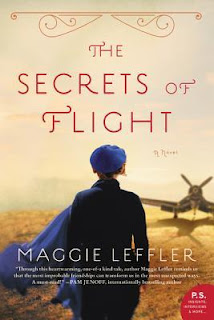 This captivating, breakout novel—told in alternating viewpoints—brings readers from the skies of World War II to the present day, where a woman is prepared to tell her secrets at last.

Estranged from her family since just after World War II, Mary Browning has spent her entire adult life hiding from her past. Now eighty-seven years old and a widow, she is still haunted by secrets and fading memories of the family she left behind. Her one outlet is the writing group she’s presided over for a decade, though she’s never written a word herself. When a new member walks in—a fifteen-year-old girl who reminds her so much of her beloved sister Sarah—Mary is certain fate delivered Elyse Strickler to her for a reason.

Mary hires the serious-eyed teenager to type her story about a daring female pilot who, during World War II, left home for the sky and gambled everything for her dreams—including her own identity.

As they begin to unravel the web of Mary’s past, Mary and Elyse form an unlikely friendship. Together they discover it’s never too late for second chances and that sometimes forgiveness is all it takes for life to take flight in the most unexpected ways.


Paperback, 344 pages
Published May 3rd 2016 by William Morrow Paperbacks
ARC via Edelweiss
****
It isn't a secret the dual time books are a favorite of mine. Usually there is always one story line that I am drawn to more than the other, however with The Secrets of Flight both stories kept me entertained.  I love the cover for this book, with a husband with his private pilots license, I am attracted to these little planes. Add to that, this is also a book of writers and it's at a writers group meeting that Mary and Elyse meet. A book about books and  writers - how can that not be a great start.

Mary is almost 90 years old when she decides her story needs to told as well as to come to terms with her past. There are secrets that she needs to come clean with and her decision to tell 15 year old Elyse was an interesting twist. Two totally different characters with different personalities and background making this relationship interesting to watch as it developed into something special.

I really enjoyed the authors writing style it wasn't hard to get lost in this story. When thinking of World War II I give little thought to the impact on those living in countries where the fighting is not taking place.  With The Secrets of Flight the reader feels the struggles of Mary and her family during this time. The story line was unique as Mary learned to fly planes while keeping it a secret from most of her family. When the war dawns this creates more obstacles for Mary and she is forced to make some decisions that will impact the rest of her life and that of her family.

Young Elyse isn't without here own conflicts and how these two meshed together, overcoming pain and heartache brought forth not just an entertaining story but one that touches the heart strings.

Thank you to Edelweiss for an advanced copy of this book.
Posted by Margaret @ JustOneMoreChapter at 10:52 AM