Waiting on Wednesday: The Undoing of Saint Silvanus by Beth Moore 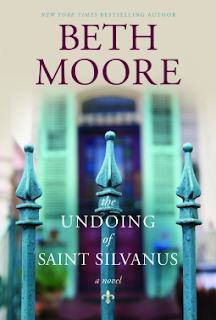 I received a sampler (from netgalley) for this book.  The first 32 pages were enough to peak my interest and I look forward to this book.  Beth Moore is a gifted writer of nonfiction and I find her transition to fiction intriguing.

Exciting fiction premiere from beloved "New York Times" bestselling author Beth Moore.Only God knew why Jillian Slater agreed to return to New Orleans on the news that her father had finally drunk himself to death. It's not like they were close. She hadn't seen him--or her grandmother, the ice queen--in almost 20 years. But when Adella Atwater, the manager of her grandmother's apartment house, called and said Jillian's expenses would be paid if she'd fly in for the burial, a free trip to New Orleans was too intriguing to resist.

What Adella didn't tell her was that the apartment house wasn't a house at all and, whatever it was, bore the dead weight of a long and painful history. As soon as Jillian meets the odd assortment of renters and realizes that her grandmother had no idea she was coming, she hatches a plan to escape. But the investigation into her father's death quickly unfolds and Jillian is drawn into the lives of the colorful collection of saints and sinners who pass through Saint Silvanus. She soon discovers there is more at stake than she ever imagined. Who is behind the baffling messages and the strange relics left on the steps? Is it possible that her family is actually cursed? Or is it just this crazy old house that holds them all under its spell?

Jillian walks into a web of spiritual and personal danger borne out of her family's broken history, and despite Adella's wiliest efforts, only God himself can orchestrate the undoing of all that is going on at Saint Silvanus.

Posted by Margaret @ JustOneMoreChapter at 9:39 PM