Review: The House Between Tides by Sarah Maine 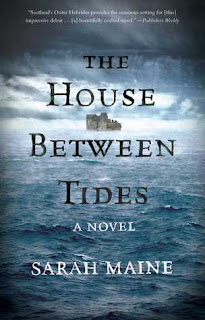 Kate Morton meets Daphne du Maurier in this atmospheric debut novel about a woman who discovers the century-old remains of a murder victim on her family’s Scottish estate, plunging her into an investigation of its mysterious former occupants.

Following the death of her last living relative, Hetty Deveraux leaves London and her strained relationship behind for Muirlan, her ancestral home in Scotland’s Outer Hebrides. She intends to renovate the ruinous house into a hotel, but the shocking discovery of human remains brings her ambitious restoration plans to an abrupt halt before they even begin. Few physical clues are left to identify the body, but one thing is certain: this person did not die a natural death.

Hungry for answers, Hetty discovers that Muirlan was once the refuge of her distant relative Theo Blake, the acclaimed painter and naturalist who brought his new bride, Beatrice, there in 1910. Yet ancient gossip and a handful of leads reveal that their marriage was far from perfect; Beatrice eventually vanished from the island, never to return, and Theo withdrew from society, his paintings becoming increasingly dark and disturbing.

What happened between them has remained a mystery, but as Hetty listens to the locals and studies the masterful paintings produced by Theo during his short-lived marriage, she uncovers secrets that still reverberate through the small island community—and will lead her to the identity of the long-hidden body.


"Could families simply bury secrets? And then forget them--Surely there would be something, some hint of wrongness of something off-key."

Kate Morton meets Daphne du Maurier is what attracted me to this book, the cover didn't hurt either.  I am a big fan of Kate Morton and there are times all the hype of mentioning the likes of her could lead to a big letdown.  Thankfully that is not the case with this one.   I don't go out of my way to read anything dark and Gothic, but this one had so many things going for it that I couldn't help but request an ARC (via netgalley).

The House Between Tides begins with a prologue in 1945.  Then it alternates between 2010 and 1910 for the rest of the book.  I usually love a good prologue, one that lets the reader get a glimpse of what is to come, igniting the imagination and staying in the back of my mind as the story unfolds. I enjoyed this one, it grabbed my attention, as I immersed myself in this story pieces slowly came together.

With an island holding secrets of its own and a dark crumbling isolated manor The House Between Tides was a story about forbidden love with characters that came to life, it was suspenseful and mysterious and hard to put down.  It's the type of book where you can forget what's going on around you, getting totally absorbed and it's one of those books that will stay with me long after I finished.

The author's writing style made it all the easier to be drawn in.  The descriptions had me visualizing so much here and anticipating what was going to happen next. Hard to believe that this is a debut, but it makes me anxious to see what Sarah Maine is working on next.

Definitely a book I highly recommend and thank you to Atria Books for an advanced copy.

Posted by Margaret @ JustOneMoreChapter at 11:39 AM