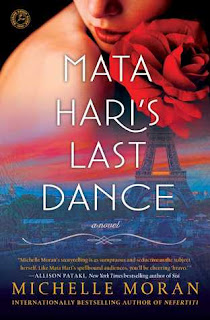 Paris, 1917. The notorious dancer Mata Hari sits in a cold cell awaiting freedom…or death. Alone and despondent, Mata Hari is as confused as the rest of the world about the charges she’s been arrested on: treason leading to the deaths of thousands of French soldiers.

As Mata Hari waits for her fate to be decided, she relays the story of her life to a reporter who is allowed to visit her in prison. Beginning with her carefree childhood, Mata Hari recounts her father’s cruel abandonment of her family as well her calamitous marriage to a military officer. Taken to the island of Java, Mata Hari refuses to be ruled by her abusive husband and instead learns to dance, paving the way to her stardom as Europe’s most infamous dancer.


Paperback, 288 pages
Published July 19th 2016 by Touchstone
****
I can honestly say when I started this book I knew absolutely nothing about Mata Hari, I've heard the name before but that is about it. My reason for requesting this from Netgalley was the author, Michelle Morin, as I have always enjoyed her books in the past.

This is not a long book, coming in under 300 pages. Mata Hari being her stage name, her real name Margaretha Zelle MacLeod "M'greet" and this book is told from her point of view. It's a fast-moving story that tells how she came to be the famous exotic dancer that scandalized Parisian society. The story progresses jumping from her seductive dance routines to a string of wealthy lovers along with her reminiscing about childhood, marriage and motherhood.  Concluding with charges of treason for being a World War I spy. That is a lot to fill in in under 300 pages and I would have loved for it to be a little longer with  more depth and detail.

That being said I found the author was still able to write about Mata Hari's life keeping me captivated with her story and feeling empathy. At times I found her to be naïve and even a little immature in her actions and her shopping habits, she gave off the impression of being a lost soul searching for something but not knowing what it was, making the outcome that much more heartbreaking.

Mata Hari's Last Dance is a book that I will recommend to lovers of historical fiction.  Thank you to Touchstone (via Netgalley) for an ARC.

Posted by Margaret @ JustOneMoreChapter at 8:21 PM