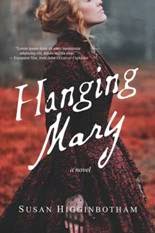 
As hope fades for the Confederacy and victory looms for the Union in the fall of 1864, the widowed Mary Surratt, left heavily in debt by her drunken husband, moves to Washington with her children, John and Anna, and opens her home to boarders. There she welcomes the friends of  John, a Confederate courier, even as she is disturbed by her son's increasingly secretive behavor.

Fresh from convent school, bookish Nora Fitzpatrick finds a second mother in Mary, and is fascinated by the odd characters who frequent her landlady's house. But none of the visitors is so thrilling as John Surratt's new friend, the dashing actor John Wilkes Booth, who captivates Nora and Anna with his charm and good looks, and whose fervor for the Southern cause draws John—and Mary—into an audacious scheme to save the dying Confederacy.

Then on Good Friday, 1865, Booth commits an act that will reverberate through history. Suddenly everyone in the boardinghouse is under suspicion, and everyone has something to hide or to reveal. And in the tumultuous weeks that follow, some will be changed forever—and some will lose everything.