Review: The Dream of the City by Andrés Vidal 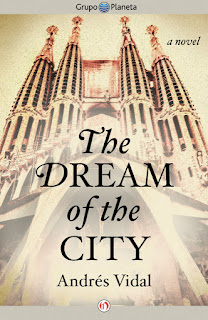 Part love story, part chronicle of the modernist years of Barcelona and a society about to change irrevocably, The Dream of the City is an homage to the genius of the Catalan architect Antoni Gaudí (1852-1926)—an exciting historical novel in which we tour the most bohemian parts of Barcelona.

In Barcelona, at the beginning of the 20th century, the destinies of two families, the Jufresas and the Navarros, converge: Francesc Jufresa is the head of the bourgeois family which runs the most renowned goldsmith workshop in the city. His daughter, the beautiful Laura, rejects the limited future of a housewife and mother to work with the brilliant Gaudí on the sculptures for the Sagrada Familia. Juan is the head of the Navarros, a poor family whose members must work hard to survive. Dimas, the first born, embodies his father’s hopes and resents the dangerous and ill-paying work of a streetcar mechanic. When the independent Laura and the ambitious Dimas meet, the encounter will change their lives forever.

"Patience consists of waiting, not passively, but rather working with persistence, even when the solution does not appear near to hand."

As soon as I heard about this book I really wanted to read it.  I have been to Barcelona and visited the Sagrada Familia, it is stunning and words are hard to come by that would adequately describe it.

I was hoping for more about the Sagrade Familia in this book but the story inside was still interesting.  It showed a side of Barcelona in the early 20th century, a city growing and two families involvement in that. The characters were likable, Laura (a woman of privilege) with her desire for independence and going after what she wants. Dimas, growing up poor doesn't want to live like that forever and takes whatever steps to prevent that from happening.  The author clearly depicted an authentic picture of the time period, focusing on the dreams of it's citizens as well as disappointments and working for a better life. It is obvious that a fair amount of research went into writing this book.

What prevented me from giving this book more stars is the spelling/grammatical errors throughout.  I am taking into account that maybe I received an unedited version, but things like there/their, here/hear, ate/eight just got out of hand as well as words missing letters made me pause in my reading and interrupted the flow.

I am not sure if this is the authors debut, I would definitely read more by Andres Vidal provided it was edited properly. 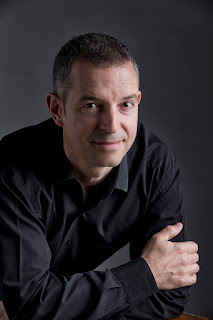 Andrés Vidal is the pseudonym of Marius Molla. He is the author of two other novels that were successes in Spain: Inheriting the Earth (2010) and The Dream (2012). By training the author is an industrial engineer in Barcelona.