Review: In the Shadow of the Storm (The King’s Greatest Enemy, Book One) by Anna Belfrage 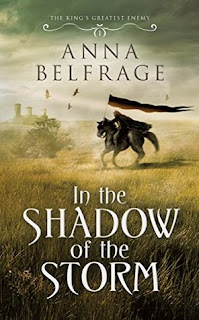 Adam de Guirande owes his lord, Sir Roger Mortimer, much more than loyalty. He owes Sir Roger for his life and all his worldly good, he owes him for his beautiful wife – even if Kit is not quite the woman Sir Roger thinks she is. So when Sir Roger rises in rebellion against the king, Adam has no choice but to ride with him – no matter what the ultimate cost may be.

England in 1321 is a confusing place. Edward II has been forced by his barons to exile his favourite, Hugh Despenser. The barons, led by the powerful Thomas of Lancaster, Roger Mortimer and Humphrey de Bohun, have reasons to believe they have finally tamed the king. But Edward is not about to take things lying down, and fate is a fickle mistress, favouring first one, then the other.

Adam fears his lord has over-reached, but at present Adam has other matters to concern him, first and foremost his new wife, Katherine de Monmouth. His bride comes surrounded by rumours concerning her and the baron, and he hates it when his brother snickers and whispers of used goods.

Kit de Courcy has the misfortune of being a perfect double of Katherine de Monmouth – which is why she finds herself coerced into wedding a man under a false name. What will Adam do when he finds out he has been duped?

Domestic matters become irrelevant when the king sets out to punish his rebellious barons. The Welsh Marches explode into war, and soon Sir Roger and his men are fighting for their very lives. When hope splutters and dies, when death seems inevitable, it falls to Kit to save her man – if she can.

In the Shadow of the Storm is the first in Anna Belfrage’s new series, The King’s Greatest Enemy, the story of a man torn apart by his loyalties to his baron, his king, and his wife.

I am sure that there are quite a number of reviews that share my initial thoughts about In the Shadow of the Storm.  As big fans of the Graham Saga and Anna Belfrage we awaited this new book with both eager anticipation and that little bit of trepidation.  Can she create another couple to replace, no replace is the wrong word because you can't replace Alex and Matthew.  But can she create this new couple, Kit and Adam, with their own unique personalities and traits?

The answer of course is a resounding yes!  Right from the first page Anna grabbed my attention and kept it throughout.  Women from the 1300's were political pawns and you married who you were told to marry,  but in Kit's situation it was totally different  (see synopsis above).  The author made me care for her right from the first page.  Though Kit and Adam are fictional characters,  Roger Mortimer, Despener and King Edward II are real as are events that take place.  The depth of research the author has done is evident here, it wasn't hard to visualize not just what was taking place but also feel the emotional vibes as well.

There are scenes of violence (nothing too graphic, but enough to get the picture) that totally reflect the time period and there are scenes of love (this is Anna Belfrage here, she knows how to write them).  Of course the authors writing style was smooth and it wasn't hard to get lost in this book.  All in all a great start to a new series, one of which I anxiously await book #2.

Had Anna been allowed to choose, she’d have become a professional time-traveller. As such a profession does as yet not exists, she settled for second best and became a financial professional with two absorbing interests, namely history and writing. These days, Anna combines an exciting day-job with a large family and her writing endeavours.

When Anna fell in love with her future husband, she got Scotland as an extra, not because her husband is Scottish or has a predilection for kilts, but because his family fled Scotland due to religious persecution in the 17th century – and were related to the Stuarts. For a history buff like Anna, these little details made Future Husband all the more desirable, and sparked a permanent interest in the Scottish Covenanters, which is how Matthew Graham, protagonist of the acclaimed The Graham Saga, began to take shape.

Set in 17th century Scotland and Virginia/Maryland, the series tells the story of Matthew and Alex, two people who should never have met – not when she was born three hundred years after him. With this heady blend of romance, adventure, high drama and historical accuracy, Anna hopes to entertain and captivate, and is more than thrilled when readers tell her just how much they love her books and her characters.

Presently, Anna is hard at work with her next project, a series set in the 1320s featuring Adam de Guirande, his wife Kit, and their adventures and misfortunes in connection with Roger Mortimer’s rise to power. The King’s Greatest Enemy is a series where passion and drama play out against a complex political situation, where today’s traitor may be tomorrow’s hero, and the Wheel of Life never stops rolling.

The first installment in the Adam and Kit story, In the Shadow of the Storm, will be published in the autumn of 2015.

During the Blog Tour we will be giving away 2 eBooks and 1 paperback! To enter, see the GLEAM form below.
Rules
– Giveaway ends at 11:59pm EST on December 22nd. You must be 18 or older to enter.
– Giveaway is open internationally.
– Only one entry per household.
– All giveaway entrants agree to be honest and not cheat the systems; any suspect of fraud is decided upon by blog/site owner and the sponsor, and entrants may be disqualified at our discretion
– Winner has 48 hours to claim prize or new winner is chosen. In the Shadow of the Storm
Posted by Margaret @ JustOneMoreChapter at 1:19 AM