Review: The Push by Ashley Audrain 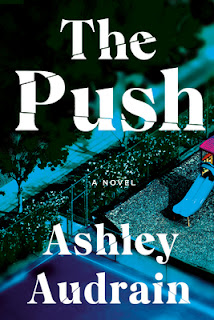 A tense, page-turning psychological drama about the making and breaking of a family–and a woman whose experience of motherhood is nothing at all what she hoped for–and everything she feared.

Blythe Connor is determined that she will be the warm, comforting mother to her new baby Violet that she herself never had.

But in the thick of motherhood’s exhausting early days, Blythe becomes convinced that something is wrong with her daughter–she doesn’t behave like most children do.

Or is it all in Blythe’s head? Her husband, Fox, says she’s imagining things. The more Fox dismisses her fears, the more Blythe begins to question her own sanity, and the more we begin to question what Blythe is telling us about her life as well.

Then their son Sam is born–and with him, Blythe has the blissful connection she’d always imagined with her child. Even Violet seems to love her little brother. But when life as they know it is changed in an instant, the devastating fall-out forces Blythe to face the truth.

The Push is a tour de force you will read in a sitting, an utterly immersive novel that will challenge everything you think you know about motherhood, about what we owe our children, and what it feels like when women are not believed.
Paperback, 320 pages
Published January 5th 2021
by Viking
4/5 stars
Just excuse me for a moment while I process this book.
It's one of those books that made big waves when first released, which is why sometimes I like to let the dust settle before diving in.  In the end this was a buddy read with bestie reading buddy Laurie from TheBakingBookworm fame (click to see her review).
I struggled to find the right way to describe this book and came up with enticingly off-putting. I read it in like 2 1/2 days (and that's super fast for me).  This was like a roller coaster ride, the first few pages had me questioning what was going one, then the next few chapters started rolling right along until I got to a point I couldn't stop reading.  Then a lull in the middle and off it went again until I had to finish her off.
Told from Blythe's POV with pieces of her extended past giving light to her history. The characters were messed up as was the story (I mean that in a good way).  Honestly I didn't like the lot of them and that's what made the story what it was.  Unreliable, scary and kinda sad and disturbing really.  The ending was ok but I wanted a little more, even just another chapter or two. But what I really craved was hearing from the men in this story.  They came off as insensitive and spineless, I would have loved to hear their thoughts.
The Push is a story of motherhood, the struggles, bonding and even the desire to be a mother. This book will actually stay with me for awhile due to the emotional impact it had.
For a debut this was solid and given the 2 book deal the author signed I can't wait to see what the author comes up with next.
This book was part of my 2021 Reading Off My Shelf Challenge #32

Posted by Margaret @ JustOneMoreChapter at 9:44 AM