A Vow So Bold and Deadly (Cursebreakers #3) by Brigid Kemmerer 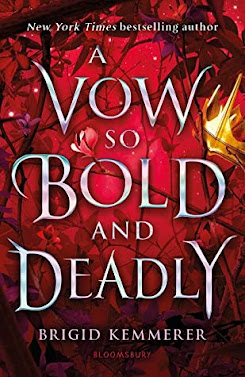 Grey has been revealed as the rightful prince of Emberfall. But the kingdom is crumbling fast, torn between his claim and that of the reigning Prince Rhen and Princess Harper.

Newly crowned as Queen of the enemy kingdom Syhl Shallow, Lia Mara struggles to rule with a gentler hand than her mother. But as Grey moves closer to claiming the crown of Emberfall, both Harper and Lia Mara are forced to question where they stand - and how far they can follow the dictates of their hearts.

Brigid Kemmerer's heart-pounding saga comes to a thrilling climax, as two kingdoms come closer and closer to conflict - and an old enemy resurfaces who could destroy them all.
Paperback, 405 pages
Published January 26th 2021
by Bloomsbury YA
3.5/5 stars
A Vow So Bold and Deadly, the final book in the Cursebreakers Series continues right where the last book left off.  Though it hasn't been that long since I read the last two books my memories were refreshed in a non info dumping way.
Like the previous books this is told from a number of different POVs - Harper, Grey, Rhen and Lia Mara. While it was nice to get the different perspectives it did take time and I found my attention waning with the back and forth and very little in the way of action.
I'm not sure that I can totally fault the book for my feelings.  Since covid hit I have been craving faster paced stories, ones with more mystery and suspense. This was a slower paced story that did pick up speed for the last 1/3, thank goodness! The ending was fitting but nothing spectacular.
When put together as the whole series I really did enjoy it, especially the first two books.
This book was part of my 2021 Reading Off My Shelf Challenge - #35.
Posted by Margaret @ JustOneMoreChapter at 9:20 AM

Email ThisBlogThis!Share to TwitterShare to FacebookShare to Pinterest
Labels: 2021, 2021 Reading Off My Shelf, Brigid Kemmerer, Fairy Tale Retelling, YA Fantasy