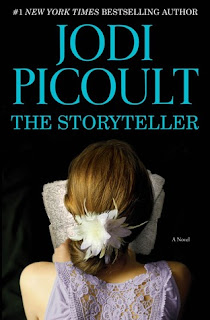 Sage Singer is a baker. She works through the night, preparing the day’s breads and pastries, trying to escape a reality of loneliness, bad memories, and the shadow of her mother’s death. When Josef Weber, an elderly man in Sage’s grief support group, begins stopping by the bakery, they strike up an unlikely friendship. Despite their differences, they see in each other the hidden scars that others can’t.
Everything changes on the day that Josef confesses a long-buried and shameful secret—one that nobody else in town would ever suspect—and asks Sage for an extraordinary favor. If she says yes, she faces not only moral repercussions, but potentially legal ones as well. With her own identity suddenly challenged, and the integrity of the closest friend she’s ever had clouded, Sage begins to question the assumptions and expectations she’s made about her life and her family. When does a moral choice become a moral imperative? And where does one draw the line between punishment and justice, forgiveness and mercy?

In this searingly honest novel, Jodi Picoult gracefully explores the lengths we will go in order to protect our families and to keep the past from dictating the future

Paperback, 480 pages
Audiobook, 18 hrs, 13 mins
Published November 5th 2013
by Atria/Emily Bestler Books
4.5/5 stars
I haven't read a Jodi Picoult book since My Sister's Keeper, many years ago.  I remember the twist and wasn't in a hurry to try again.  It was when my favourite blogger Laurie (aka TheBakingBookworm) gave this one 5 stars that resolve slowly ebbed away.
I'm glad I went the audio route here.  Told with multipe POVs the narrative followed like wise.  I knew The Storyteller would be an emotional read but honestly I didn't know what to expect as the story progressed.  Already burdened by guilt and grief Sage is placed in an unimaginable situation that gives rise to the question, what would you do?  For some it might be a clear cut answer but for others not so much.
The Storyteller is a thought provoking story, at times hard to read, it was written with feeling and compassion. It's actually hard to say too much without giving parts of the story away.  Suffice to say its a story that will stay with me for a while
The way the book is divided wasn't my favourite, there is no going back and forth in time but rather one big backstory.  I would have rather had the breaks between the past and present just to regroup (emotionally). The ending was good, with usual Picoult twists that fit nicely.
The audio was from my personal library at Audible.
Posted by Margaret @ JustOneMoreChapter at 11:25 PM