Audio Review: Alone Against the North: An Expedition into the Unknown by Adam Shoalts 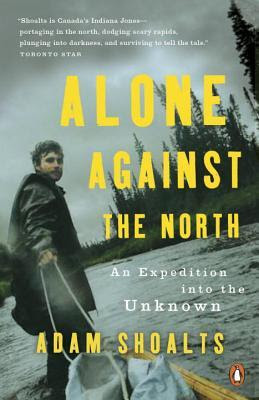 The age of exploration is not over.

When Adam Shoalts ventured into the largest unexplored wilderness on the planet, he hoped to set foot where no one had ever gone before. What he discovered surprised even him.

Shoalts was no stranger to the wilderness. He had hacked his way through jungles and swamp, had stared down polar bears and climbed mountains. But one spot on the map called out to him irresistibly: the Hudson Bay Lowlands, a trackless expanse of muskeg and lonely rivers, caribou and wolf—an Amazon of the north, parts of which to this day remain unexplored.

Cutting through this forbidding landscape is a river no explorer, trapper, or canoeist had left any record of paddling. It was this river that Shoalts was obsessively determined to explore.

It took him several attempts, and years of research. But finally, alone, he found the headwaters of the mysterious river. He believed he had discovered what he had set out to find. But the adventure had just begun. Unexpected dangers awaited him downstream.

Gripping and often poetic, Alone Against the North is a classic adventure story of single-minded obsession, physical hardship, and the restless sense of wonder that every explorer has in common.

But what does exploration mean in an age when satellite imagery of even the remotest corner of the planet is available to anyone with a phone? Is there anything left to explore?

What Shoalts discovered as he paddled downriver was a series of unmapped waterfalls that could easily have killed him. Just as astonishing was the media reaction when he got back to civilization. He was crowned “Canada’s Indiana Jones” and appeared on morning television. He was feted by the Royal Canadian Geographical Society and congratulated by the Governor General. People were enthralled by Shoalts’s proof that the world is bigger than we think.

Shoalts’s story makes it clear that the world can become known only by getting out of our cars and armchairs, and setting out into the unknown, where every step is different from the one before, and something you may never have imagined lies around the next curve in the river.

Paperback, 304 pages
Published May 10th 2016
Narrated by: Adam Shoalts
Length: 8 hrs and 10 mins
Unabridged Audiobook
Release date: 10-08-19
by Penguin Canada
3/5 stars
One of my goals for this year is to read books off my shelf and to read more nonfiction , which is where Alone Against the North comes in.  Both nonfiction and off my shelf and for this I did a combination of read and listen to the audiobook.  The other thing that attracted me is the author is local for me and I want/like to support local.
I try really hard not to read reviews prior to reading the book but in this instance somehow I accidentally saw some of the reviews that gave me pause.  There are so many mixed reviews and though it didn't sway me from listening I did go in with an open mind.  First off the author is the narrator of the audio and from that it wasn't hard to detect his passion for not just this story and this adventure (for lack of a better word) but his love of the outdoors. While talking about his journey Shoalts goes back in time and does a lot of name dropped of past explorers with their accomplishments and discoveries - nice touch.
Alone Against the North was an interesting read, I think it's one that will appeal to those interested in the outdoors. Personally I would have loved to see more pictures or even more maps to get a better feel of the location. There were times I felt it dragged a little and I questioned some the of the decisions made in regards to travelling companions, equipment and even going solo. I'm no expert on the great outdoors but living with die hard canoeists (I even went on a canoe trip last summer) had us in awe at some of the situations Adam found himself in.
All in all a book that has me itching for summer, a river, a campsite, cooking over a fire and a good book.
This book is part of my 2021 Reading of my Shelf Challenge.
Posted by Margaret @ JustOneMoreChapter at 10:46 PM