Review: The Woman Before Wallis by Bryn Turnbull 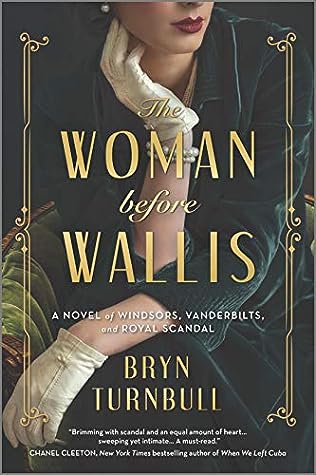 For fans of The Paris Wife and The Crown , this stunning novel tells the true story of the American divorcée who captured Prince Edward’s heart before he abdicated his throne for Wallis Simpson.

In the summer of 1926, when Thelma Morgan marries Viscount Duke Furness after a whirlwind romance, she’s immersed in a gilded world of extraordinary wealth and privilege. For Thelma, the daughter of an American diplomat, her new life as a member of the British aristocracy is like a fairy tale—even more so when her husband introduces her to Edward, Prince of Wales.

In a twist of fate, her marriage to Duke leads her to fall headlong into a love affair with Edward. But happiness is fleeting, and their love is threatened when Thelma’s sister, Gloria Morgan Vanderbilt, becomes embroiled in a scandal with far-reaching implications. As Thelma sails to New York to support Gloria, she leaves Edward in the hands of her trusted friend Wallis, never imagining the consequences that will follow.

Bryn Turnbull takes readers from the raucous glamour of the Paris Ritz and the French Riviera to the quiet, private corners of St. James’s Palace in this sweeping story of love, loyalty and betrayal.
“Brimming with scandal and an equal amount of heart…a sweeping yet intimate look at the lives of some of history’s most notorious figures from Vanderbilts to the Prince of Wales… A must-read.”—Chanel Cleeton, New York Times bestselling author of When We Left Cuba and Next Year in Havana

“Bryn Turnbull takes a story we think we know and turns it on its head, with captivating results… A beautifully written, meticulously researched and altogether memorable debut.”—Jennifer Robson, USA TODAY bestselling author of The Gown

Kindle Edition, 416 pages
Published July 21st 2020
by MIRA
3.5/5 stars
The woman before Wallis Simpson is Thelma Morgan and this is her story.
From the title some might believe this to be a book about the royal family and abdication of King Edward. But really its about Thelma, her relationship with twin sister Gloria, her husband Duke and yes Prince Edward.  I'll admit most of my knowledge of this time came through watching The Crown which has piqued my interest - hence why I wanted to read this book.  In 1926 Gloria Vanderbilt is playing matchmaker for Thelma then jump to 1934 and the custody battle of the century is about to take place.  There is a lot that goes on in those years, I was kept on my toes with the transitions and the wide cast of characters.
The author definitely researched quite thoroughly, as the title says A Novel of Windsors, Vanderbilt's and Royal Scandal.  But there is more, it's not just the lifestyle of those family's but society in general, even going through the depression it was interesting to read what the rich and famous were up to. How they hid indiscretions, or not. At times I might have felt it progressed a little slowly but all in all an enjoyable read.
My thanks to the publisher (via Netgalley) for an advanced copy in exchange for an honest review.
Posted by Margaret @ JustOneMoreChapter at 8:22 AM