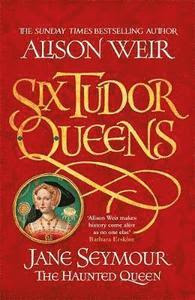 A novel of the devout young woman who became the unwilling object of King Henry VIII's ardor - and the mother of his only son.
In this third book in the epic Six Tudor Queens series, the acclaimed historian and best-selling author brings new insight to this dramatic story, showing how pure fear for her life determined Jane Seymour's actions.

Twenty-five-year-old Jane Seymour wants nothing more than to become a nun. But her ambitious father has forced her to live at court as lady-in-waiting to Queen Katherine of Aragon, a fellow Catholic whom she soon comes to love and admire. So Jane is appalled when King Henry shunts Katherine aside in his lustful pursuit of Anne Boleyn, but even more so when he takes Anne's life in his rush to wed - Jane herself!

Unwilling to marry but terrified to resist Henry's advances for fear she might share Anne's fate, and propelled by her family, Jane becomes queen of England a mere 10 days after Anne's execution. She knows she must produce a male heir without fail. Her very life depends on it.
Hardcover, 531 pages
Published May 3rd 2018
by Headline Review
3.5/5 stars
Jane Seymour, the 3rd wife of Henry VIII and supposedly the one he truly loved (could it be because she gave him a son?).  There is very little historical info about Jane, she left no writings or anything behind to give a true sense of who she was.  The author notes were great on that level.
This is the 3rd book in Alison Weir's series on the wives of good old King Henry VIII and one I was really looking forward to reading.  While the story's do overlap - Jane was a lady-in-waiting to Queen Katherine and again for Anne Boleyn, but coming from the point of view of Jane just gave another view of this time.  I enjoyed getting to know Jane through her life before arriving at court, her plans to be a nun along with her brothers (whom I am sure will show up in subsequent books).
As always I enjoy Alison Weir's writing, her knowledge of the time brings the era to life and the author notes explain some of the issues that could be up for debate. Heavily researched  I enjoyed getting to know Jane even though I felt the book dragged here and there a bit.  Definitely recommend for Tudor fans.
This book was part of my 2020 Reading of my Shelf Challenge #36
Posted by Margaret @ JustOneMoreChapter at 10:18 PM