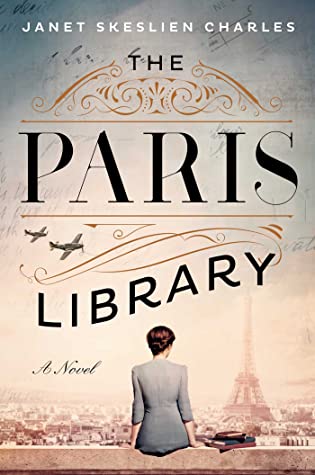 Paris, 1939. Odile Souchet is obsessed with books and the Dewey Decimal System, which makes order out of chaos. She soon has it all – a handsome police officer beau, an English best friend, a beloved twin, and a job at the American Library in Paris, a thriving community of students, writers, diplomats, and book lovers. Yet when war is declared, there's also a war on words.

Montana, 1983. Widowed and alone, Odile suffers the solitary confinement of small-town life. Though most adults are cowed by her, the neighbor girl will not let her be. Lily, a lonely teenager yearning to break free of Froid is obsessed with the older French woman who lives next door and wants to know her secrets.

As the two become friends, Odile sees herself in Lily – the same love of language, the same longings, the same lethal jealousy. The Paris Library’s dual narratives explore the relationships that make us who we are – family and friends, first loves and favorite authors – in the fairy tale setting of the City of Light. It also explores the geography of resentment, the consequences of unspeakable betrayal, and what happens when the people we count on for understanding and protection fail us.

The wit, empathy, and deep research that brings The Paris Library to life also brings to light a cast of lively historical characters and a little-known chapter of World War II history: the story of the American librarian, Miss Reeder, who created the Soldiers’ Service to deliver books to servicemen, and who later faced the Nazi ‘Book Protector’ in order to keep her library open. She and her colleagues defied the Bibliotheksschutz by delivering books to Jewish readers after they were forbidden from entering the library.
Paperback, 416 pages


The Paris Library is more than a story about WW2. Oh it’s a very interesting, well written, and well-researched book.  I loved the historical aspects - a library kept open during the war, how it functioned as the Nazis take control of France. It only stands to reason that those who not just work there but those that patronize it are also affected.

But my take away is more. The Paris Library is an emotional story about human nature and what happens when confronted with the unimaginable and how one reacts. Who do you trust? Whom should you fear? When one is scared it's easy to lash out in anger and confusion, to make decisions not anticipating the consequences.
Told in dual time periods, I am usually drawn to the past but I enjoyed the 1983 storyline also. The developing friendship between Lily and Odile added that little something extra and actually a nice diversion from the heartbreak of Paris life during the war.

The author's note rounded this book out nicely.  So much of this story is based on historical facts along with a lot of real people from the past making this book all the more compelling.  Written with compassion The Paris Library is a book that will stay with me for a while.

My thanks to Simon & Schuster for a print ARC in exchange for an honest review.
Posted by Margaret @ JustOneMoreChapter at 10:56 PM