Review: House of Salt and Sorrows by Erin A. Craig 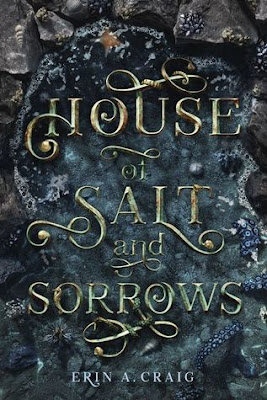 In a manor by the sea, twelve sisters are cursed.

Annaleigh lives a sheltered life at Highmoor, a manor by the sea, with her sisters, their father, and stepmother. Once they were twelve, but loneliness fills the grand halls now that four of the girls' lives have been cut short. Each death was more tragic than the last—the plague, a plummeting fall, a drowning, a slippery plunge—and there are whispers throughout the surrounding villages that the family is cursed by the gods.

Disturbed by a series of ghostly visions, Annaleigh becomes increasingly suspicious that the deaths were no accidents. Her sisters have been sneaking out every night to attend glittering balls, dancing until dawn in silk gowns and shimmering slippers, and Annaleigh isn't sure whether to try to stop them or to join their forbidden trysts. Because who—or what—are they really dancing with?

When Annaleigh's involvement with a mysterious stranger who has secrets of his own intensifies, it's a race to unravel the darkness that has fallen over her family—before it claims her next.

Another book where it was the cover that grabbed my attention, what can I say!? But as they say, looks can be deceiving and yes I have been burned before. I am happy to say this one lived up to the cover.

Fairy tale retellings are fun to read, I did go ahead and read Twelve Dancing Princesses first and no there wasn’t anything more revealed that isn’t in the blurb above.

I wasn't sure what to expect here but suffice to say this was atmospheric and definitely had the chill factor. With that Gothic feeling, it was set overlooking the sea with its secret passageways, hintings of a curse, magic and a family that has been in mourning for years and years.

House of Salt and Sorrow is a well written debut. It had that raw plot to remind me fairy tales weren’t originally written for a young audience. With a slow start, the pace increased as the plot opened up to a wide range of characters and had me regarding each with suspicion.  I can’t say the romance worked for me, but that could just be me.

So 3.5 stars rounded up to 4. If you need something to escape to this would be one I recommend.


This book was part of my 2020 reading from my shelf challenge.
Posted by Margaret @ JustOneMoreChapter at 3:32 PM

Email ThisBlogThis!Share to TwitterShare to FacebookShare to Pinterest
Labels: 2020, 2020 Reading off my shelf, Erin A. Craig, Fairy Tale Retelling, New to me author