Review: Woman on the Edge by Samantha M. Bailey 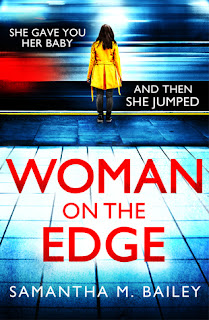 A moment on the platform changes two lives forever. But nothing is as it seems...

In a split second, Morgan's life changes forever. A stranger hands her a baby, then jumps in front of a train.

Morgan has never seen the woman before and she can't understand what would cause a person to give away her child and take her own life.

When the police question Morgan, she discovers none of the witnesses can corroborate her version of events. And when they learn Morgan longs for a baby of her own, she becomes a suspect.

To prove her innocence, Morgan frantically tries to retrace the last days of the woman's life. She begins to understand that Nicole Markham believed she and her baby were in danger. Now Morgan might be in danger, too.

Was Nicole a new mother struggling with paranoia?

Or was something much darker going on?

Pulse-pounding, heartrending, shocking, thrilling. This is one book you won't be able to stop thinking about.

Did you get the last line of the blurb above? This is one of those books that is embedded in my brain right now on so many levels. It starts with a bang and literally doesn’t let go until the end. And even then I still think about Nicole, I feel for her and can’t help thinking things that I can’t even talk about in this review (keeping it spoiler-free is hard when there is much I want to say).

So suffice to say Woman on the Edge is a fast-paced story that kept me glued to my kindle. It had me trying to solve the puzzle before all the pieces were put together. It dealt with issues though common -  guilt, fear and loneliness but the deeper emotional changes after giving birth.

Every book affects the individual reader in different ways, this one touched me maybe more so with one of the layers than others, making this an emotional read as well as being suspenseful and an addicting book.

This is the author's debut and I am impressed, sure hope we don't have to wait 6 years for her next one.


My thanks to Simon & Schuster Canada for an e-arc (via Netgalley) in exchange for honest review.
Posted by Margaret @ JustOneMoreChapter at 4:36 PM