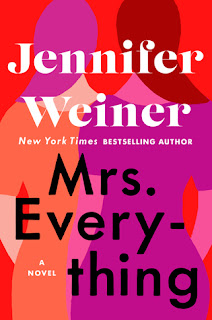 From Jennifer Weiner, the #1 New York Times bestselling author of Who Do You Love and In Her Shoes comes a smart, thoughtful, and timely exploration of two sisters’ lives from the 1950s to the present as they struggle to find their places—and be true to themselves—in a rapidly evolving world.

Do we change or does the world change us?

Jo and Bethie Kaufman were born into a world full of promise.

Growing up in 1950s Detroit, they live in a perfect “Dick and Jane” house, where their roles in the family are clearly defined. Jo is the tomboy, the bookish rebel with a passion to make the world more fair; Bethie is the pretty, feminine good girl, a would-be star who enjoys the power her beauty confers and dreams of a traditional life.

But the truth ends up looking different from what the girls imagined. Jo and Bethie survive traumas and tragedies. As their lives unfold against the background of free love and Vietnam, Woodstock and women’s lib, Bethie becomes an adventure-loving wild child who dives headlong into the counterculture and is up for anything (except settling down). Meanwhile, Jo becomes a proper young mother in Connecticut, a witness to the changing world instead of a participant. Neither woman inhabits the world she dreams of, nor has a life that feels authentic or brings her joy. Is it too late for the women to finally stake a claim on happily ever after?

In her most ambitious novel yet, Jennifer Weiner tells a story of two sisters who, with their different dreams and different paths, offer answers to the question: How should a woman be in the world?


This is my first time reading anything by Jennifer Weiner, it’s another book where all the hype had me intrigued and honestly there is nothing like discovering new authors.

This was an audio read for me and I’m glad I went that route. The reader was Ari Graynor and Beth Malone, both of which did a great job.

I will admit to struggling at times with this book. I found parts slow with scenes I didn't feel added to the story but that being said the author placed me right in the ‘50 and ’60s, from the music, prejudices and women’s roles I’ll say she nailed it. I grew up, well sorta, in the ’60s and remember the music, tv shows and hippie clothing. It was great revisiting that, but to me it could have been shortened, my opinion only as I seem to be in the minority here.

“When your mom and I were your age, there weren't a lot of options for girls. Like, you know how your mother's always telling you that you can be anything you want to be when you grow up? That wasn't what we heard. Men could be doctors or lawyers. We were just supposed to marry them.”


What I loved about this book was the message it reflected and how it spoke to me (and hopefully lots of other women).

“She loved [her daughters]. More than that, she admired them. They would be better than she was: stronger and smarter, more capable and less afraid, and if the world displeased them, they would change it, cracking it open, reshaping it, instead of bending themselves to its demands.”


Posted by Margaret @ JustOneMoreChapter at 3:38 PM