Review: At the Mountain's Edge by Genevieve Graham 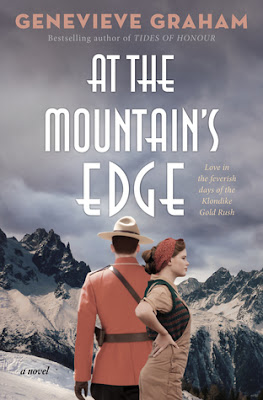 Inspired by history as rich as the Klondike’s gold, At the Mountain’s Edge is an epic tale of romance and adventure about two people who must let go of the past not only to be together but also to survive.

Genevieve Graham is one of my go-to authors for Canadian historical fiction. Her previous 3 books take place in the East coast of Canada, with At The Mountain's Edge she took me clear across the country to the Yukon during the Gold Rush.

Told from 2 different pov’s, which isn’t unusual for her books, I was treated to both sides of the law during the mad frenzy to strike it rich. I loved learning about the journey, in 1897, to reach the Klondike. It was harsh, cold and I can totally see the struggles they had to endure when in reality I’m sure they thought it would be an easy trek in the bush. Liza is taken on a journey she doesn't want but really isn't given a choice in the matter.  Ben wants to escape his past only to realize he can't run from it.

The early years of the North West Mounties, later to become the RCMP, was interesting to read about. The author notes always fascinate me, it’s where the author tells her inspiration, what’s real and the research used. Drawing on documentation from those years Graham has woven a tale of adventure, survival and discovering one's self.


My thanks to Simon & Schuster for an ARC in exchange for honest review.
Posted by Margaret @ JustOneMoreChapter at 10:46 PM