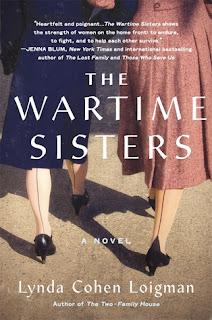 Two estranged sisters, raised in Brooklyn and each burdened with her own shocking secret, are reunited at the Springfield Armory in the early days of WWII. While one sister lives in relative ease on the bucolic Armory campus as an officer’s wife, the other arrives as a war widow and takes a position in the Armory factories as a “soldier of production.” Resentment festers between the two, and secrets are shattered when a mysterious figure from the past reemerges in their lives.


I love it when I book takes over my day, it’s been a while since I’ve read anything as fast as this one. To say the author has a knack for character development would be an understatement. While I found the story interesting, compelling and full of secrets it was the characters that stood out. It wasn't that they were just real, believable and struggling but I got to know them so well. I knew what made them tic, their fears and struggles, they became friends I wanted to help.

Sisters Ruth and Millie have never been close, their's is a complicated relationship and as time goes by they grow farther and farther apart. With the added voices of Arietta and Lillian, this book was well rounded.

The Wartime Sisters is a book of secrets, lies, and family - not necessarily blood-related either. My take away is that this is a story of not judging or assuming but rather having compassion, we don’t know what others are going through, so think before speaking and show some love instead. A powerful story that will stay with me and a new author I highly recommend.

My thanks to St. Martin's (via Netgalley) for an advanced copy in exchange for honest review.
Posted by Margaret @ JustOneMoreChapter at 10:30 PM