Review and Giveaway (signed copy): The Home for Unwanted Girls by Joanna Goodman 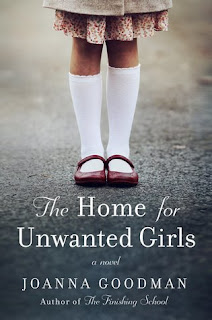 Philomena meets The Orphan Train in this suspenseful, provocative novel filled with love, secrets, and deceit—the story of a young unwed mother who is forcibly separated from her daughter at birth and the lengths to which they go to find each other.

In 1950s Quebec, French and English tolerate each other with precarious civility—much like Maggie Hughes’ parents. Maggie’s English-speaking father has ambitions for his daughter that don’t include marriage to the poor French boy on the next farm over. But Maggie’s heart is captured by Gabriel Phénix. When she becomes pregnant at fifteen, her parents force her to give baby Elodie up for adoption and get her life ‘back on track’.

Elodie is raised in Quebec’s impoverished orphanage system. It’s a precarious enough existence that takes a tragic turn when Elodie, along with thousands of other orphans in Quebec, is declared mentally ill as the result of a new law that provides more funding to psychiatric hospitals than to orphanages. Bright and determined, Elodie withstands abysmal treatment at the nuns’ hands, finally earning her freedom at seventeen, when she is thrust into an alien, often unnerving world.

Maggie, married to a businessman eager to start a family, cannot forget the daughter she was forced to abandon, and a chance reconnection with Gabriel spurs a wrenching choice. As time passes, the stories of Maggie and Elodie intertwine but never touch, until Maggie realizes she must take what she wants from life and go in search of her long-lost daughter, finally reclaiming the truth that has been denied them both.

I read this book back in June and somehow neglected to not just post a review but also host a giveaway. Harper Collins Canada very graciously provided me with an extra copy of this book during an author event they hosted. This copy is also signed by the author - scroll down for a giveaway.

It isn’t a secret that I love historical fiction, and I love reading books set in Canada. Those that help me learn more about this great country. Not only is Joanna Goodman a new author to me but so is this home for unwanted girls and the events surrounding it.  I knew nothing about what happened back in the 1950's when orphanages were changed to psychiatric hospitals merely because of financial gain.  With no thought to the residents, my heart broke for those lost in the system, those through no fault of their own did not receive the future they deserved.

This book is told by Maggie and Elodie, both gave vivid (and heartbreaking) detail of their lives.  For Maggie it wasn't just falling for a boy from 'the other side' but it was family situations that set the course for her life.

The Home for Unwanted Girls is an emotional read, it's a book about relationships whether, between father & daughter or mother & daughter, it will pull at your heartstrings as the author set me right there.  It didn't take long to read this one, my connection to little Elodie was immediate, watching her grow up and witnessing her treatment kept me going. I rooted for her wanting to grab her, give her a hug and take her home with me.

Author notes are a favorite of mine at the end of historical fiction books, there wasn't any here and in this instance, I don't think they were necessary, Joanna Goodman laid everything out in the telling of this story.  Definitely a book I recommend.


My copy provided by Harper Collins Canada (thank you).

For an extra vote tell me about a new author you discovered this year.  Rafflecopter is acting up and won't let me add that without doing some weird things to this post.