Review: On a Cold Dark Sea by Elizabeth Blackwell 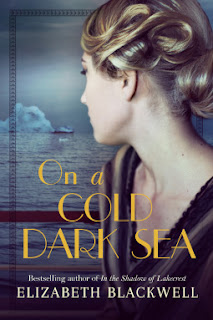 On April 15, 1912, three women climbed into Lifeboat 21 and watched in horror as the Titanic sank into the icy depths. They were strangers then…

Con artist Charlotte Digby lied her way through London and onto the Titanic. The disaster could be her chance at a new life—if she hides the truth about her past. Esme Harper, a wealthy American, mourns the end of a passionate affair and fears that everything beautiful is slipping from her grasp. And Anna Halversson, a Swedish farm girl in search of a fresh start in America, is tormented by the screams that ring out from the water. Is one of them calling her name?

Twenty years later, a sudden death brings the three women back together, forcing them to face the impossible choices they made, the inconceivable loss, and the secrets they have kept for far too long.

On a Cold Dark Sea is the story of three women who survived the Titanic, much of the first third of the book is devoted to telling the history of these women and I found that very interesting.  It gave a great first impression, Charlotte, Esme and Anna were from different social classes on the ship (1st, 2nd and 3rd class passengers) and they meet on the lifeboat, I was anxious to see what happened and what lay ahead.

There was really nothing new to add to the Titanic story, I think we all know how and what happened here with the iceberg, under loaded lifeboats and mostly women and children first.  Though these 3 women are fictional characters the book is based on the real event.

I won’t go into detail about what happens but 20 years later they are connected again where long kept secrets are finally revealed. In fact the majority of the story does not take place on the Titanic.

On a Cold Dark Sea is a story of survival, guilt and to be honest there were times I wondered if this was just a story of three women who survived the Titanic.  I liked the book, it was well written but I felt something was missing and can't quite say what it was.


Thanks to the publisher via Netgalley for an advanced copy.
Posted by Margaret @ JustOneMoreChapter at 2:30 PM