Review: The Promise of Dawn (Under Northern Skies #1) by Lauraine Snelling 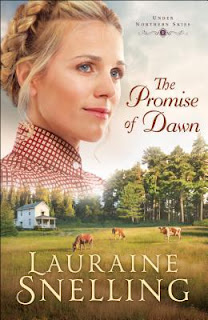 When Signe, her husband, Rune, and their three boys arrive in Minnesota from Norway to help a relative clear his land of lumber, they dream of owning their own farm and building a life in the New World. But Uncle Einar and Aunt Gird are hard, demanding people, and Signe and her family soon find themselves worked nearly to the bone in order to repay the cost of their voyage. At this rate, they will never have land or a life of their own.

Signe tries to trust God but struggles with anger and bitterness. She has left behind the only life she knew, and while it wasn't an easy life, it wasn't as hard as what she now faces. When a new addition to the family arrives, Signe begins to see how God has been watching over them throughout their ordeal. But after all that has happened, can she still believe in the promise of a bright future?


Lauraine Snelling is a new author for me and this, The Promise of Dawn, is the first book in her Northern Skies Series.

It is April 1909 when this book begins. Having never read this author before I was looking forward to being transported back in time. To feel the emotions of leaving family behind, sailing clear across the globe to begin a new life in a land full of new opportunities. The author did just that, from their treatment as lower class citizens by people they didn’t know to even worse treatment by family. Once arriving at their destination, where family awaiting things don’t goes at planned. In fact it really is kinda horrible what awaited this little family.  Talk about having your dreams shattered.

The author doesn't mince words while describing what it takes to run a household in 1909, I was exhausted for poor Signe and Rune. With both of them telling this story and getting inside their heads brought The Promise of Dawn to life. While there were parts I found repetitive I think that worked in the author's favor as it showed what the folks of that era had to do, everyday over and over again.  The story flowed along nicely with a fitting conclusion leaving me anxious for the next book in this series.


“Book has been provided  courtesy of Baker Publishing and Graf-Martin Communications, Inc.”
Posted by Margaret @ JustOneMoreChapter at 11:41 PM