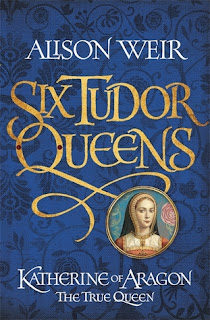 The lives of Henry VIII's queens make for dramatic stories and Alison Weir will write a series of novels that offer insights into the real lives of the six wives based on extensive research and new theories.

In all the romancing, has anyone regarded the evidence that Anne Boleyn did not love Henry VIII? Or that Prince Arthur, Katherine of Aragon's first husband, who is said to have loved her in fact cared so little for her that he willed his personal effects to his sister? Or that Henry VIII, an over-protected child and teenager, was prudish when it came to sex? That Jane Seymour, usually portrayed as Henry's one true love, had the makings of a matriarch? There is much to reveal ...

Alison will write about the wives in the context of their own age and of the court intrigues that surrounded these women and - without exception - wrecked their lives. She will transport readers into a lost and vivid world of splendour and brutality: a world in which love, or the game of it, dominates all.

This is the first book in Alison Weir's series on the wives of Henry VIII. Weir is a widely known British historian who writes both fiction and nonfiction, a number that I have read.

One of the things that attracted me to this series is that it is told from the perspective of the wife. I have previously read books on Katherine of Aragon but usually from someone else’s point of view, for me this was a nice change to get inside her head and get a different perspective. Always fascinated with Katherine, daughter of Queen Isabel of Castile and King Ferdinand of Spain, I took her to be strong and courageous. She is married the longest to Henry and takes her marriage vows very seriously. It was a refreshing change seeing her side of the story, while there was still political and religious strife played out here it did not overpower the story like it would have from other points of view.

Well I enjoyed reading this book it did take me most of the summer to complete it. It wasn’t the type that have me begging to read but rather I would pick up and read a couple chapters throughout the week while reading other things. The author stayed true to the time period using historical documents and quoting from them throughout this book sometimes giving the feel of a history lesson. Having said that reading this has given me a new appreciation for Katherine, with all that she went through, from the death of her first husband, Arthur and the many years between till her marriage to Henry. There were many pregnancies, alienation at court while dealing with Henry’s tirades and ultimate abandonment over Anne Boleyn.  Alison Weir has written a detailed account of Katherine’s life.

Definitely a series I will continue to read.


Hardcover copy part of my personal library.
Posted by Margaret @ JustOneMoreChapter at 11:27 PM