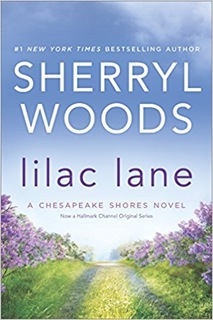 No one writes about friends, family and home better than Sherryl Woods. Told with warmth and humor, Lilac Lane is a brand-new story in her beloved Chesapeake Shores series, one readers all over the world have waited two years to read!

At the heart of Lilac Lane is Keira Malone, who raised her three children alone after her first marriage broke apart, and who, after years of guarding her heart, finally finds love again. But that love is short-lived when her fiancé suffers a fatal heart attack. Grieving and unsure of what’s next, Keira agrees to move from Dublin to Chesapeake Shores, Maryland, to spend time with her daughter, Moira, and her new granddaughter, Kate, as well as to help her son-in-law, Luke, with his Irish pub, O’Briens

Not wanting to live underfoot, she rents a charming cottage on Lilac Lane, replete with views of the ocean and her neighbor’s thriving garden—not to mention views of the neighbor himself. The neighbor is none other than Bryan Laramie, the brusque and moody chef at the pub, with whom Keira is constantly butting heads. But things get real when Bryan’s long-lost daughter, whom he hasn’t seen since she was a baby, shows up out of the blue. As Bryan and Keira each delve into their pasts, reopening wounds, the rest of the town is gearing up for the Fall Festival Irish Stew cook-off, and making no bones about whose side they’re on. It’s Kitchen Wars meets This is Your Life—a recipe for disaster…or a new take on love?

You won’t want to miss this epic return to Chesapeake Shores, a place we’re betting you’ll want to stay forever.

“I never miss an opportunity to see the water,” Kiera responded at once. “It’s one of the reasons I found my little cottage so appealing. There’s a glimpse of the bay from the yard.” “There’s an even better view from upstairs in my house,”

Bryan said. “When I leave my bedroom windows open, I can hear the lapping of the waves on the shore.”

As soon as the words were out of his mouth, Bryan regretted them. He’d spoken the truth, but it had sounded far too close to an invitation. He couldn’t be certain from her expression if Kiera had heard it that way, but he knew absolutely that the provocative image of her in his room, in his bed, wouldn’t be going away anytime soon. It shocked him just how powerful that image was.

At the questioning note in Kiera’s voice, he snapped back to the moment and realized a waitress had arrived and was waiting for their orders. “An espresso for me,” he said quickly. “Kiera?”

“I’ve already ordered a cappuccino,” she said, her lips twitching as she tried to hold back a smile.

“Well, that’s all, then,” he said, then met her gaze. “Unless you’d like something to eat.”

“The coffee will do.”

“Sure thing,” the waitress said, leaving them alone.

“Was your mind wandering?” Kiera teased. “I have to wonder where it went. It must have been a pleasant place.”

“Nowhere worth following,” he assured her, then focused his attention on the boats chugging along on the bay in the morning sunlight. It was a tranquil picture, far more tranquil than his oddly chaotic thoughts.

It had suddenly occurred to him that he was actually on something that some people would consider a date. When he’d issued the impulsive invitation, he’d given it no thought beyond the momentary desire to have Kiera’s company for a little longer before their day started at the pub. They seemed to do better with each other away from that atmosphere. Now he was realizing it was a step, albeit a tiny one, toward a more complicated relationship, something he’d successfully avoided for years.

Because he and Melody had never divorced, he’d considered himself unavailable for anything more than the most casual encounters. He was always honest with the women he’d dated, making sure they understood he wasn’t looking for anything lasting. But trying to explain why he wasn’t interested in more was too personal to share, so he avoiding anything that might be leading toward that uncomfortable conversation. Was he actually willing to have that conversation with Kiera? He couldn’t quite envision it, which meant he needed to be very careful about any signals he sent to her. “For a man who said his morning had gotten off to a good start not that long ago, you’re looking increasingly troubled,”

Kiera said. “Have I said something to make you uneasy?” “Not at all,” he said at once. “I’m just not used to doing
things like this.”

She stared at him blankly. “Like what? Having coffee?” He nodded, then chuckled. “Sounds ridiculous, doesn’t it?” “We’ve had coffee before,” she reminded him. “Well,
you’ve had coffee and I’ve had tea, but it’s the same sort of thing.”

“That was at the pub. This is entirely different. Can’t you see that?” Even as he spoke he knew that he was making way too much of an innocent hour at a sidewalk café.

Kiera simply looked puzzled, but before he could attempt an explanation, Mick O’Brien came striding down the street from the direction of his wife’s art gallery and spotted them. He paused at their table, then looked pointedly from Bryan to Kiera and back again. “Well, this is a surprise,” he said, grabbing a chair from a neighboring table and pulling it over without waiting for an invitation. “Imagine seeing the two of you here,” he said, then pointedly added, “together.”

With her roots firmly planted in the South, Sherryl Woods has written many of her more than 100 books in that distinctive setting, whether in her home state of Virginia, her adopted state, Florida, or her much-adored South Carolina. Sherryl is best known for her ability to creating endearing small town communities and families.

She is the New York Times and USA Today bestselling author of over 75 romances for Silhouette Desire and Special Edition.