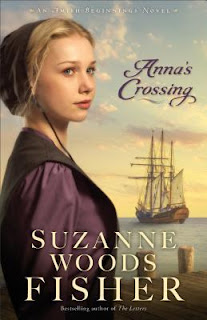 When Anna Konig first meets Bairn, the Scottish ship carpenter of the "Charming Nancy," their encounter is anything but pleasant. Anna is on the ship only to ensure the safe arrival of her loved ones to the New World.

Hardened by years of living at sea, Bairn resents toting these naive farmers--dubbed "Peculiars" by deckhands--across the ocean. As delays, storms, illness, and diminishing provisions afflict crew and passengers alike, Bairn finds himself drawn to Anna's serene nature. For her part, Anna can't seem to stay below deck and far away from the aloof ship's carpenter, despite warnings.

When an act of sacrifice leaves Anna in a perilous situation, Bairn discovers he may not have left his faith as firmly in the past as he thought. But has the revelation come too late?

Amish fiction favorite Suzanne Woods Fisher brings her fans back to the beginning of Amish life in America with this fascinating glimpse into the first ocean crossing as seen through the eyes of a devout young woman and an irreverent man. Blending the worlds of Amish and historical fiction, Fisher is sure to delight her longtime fans even as she attracts new ones with her superb and always surprise-filled writing.

In the timeline of history I love reading books on virtually unknown pieces of the past. Which is exactly what Anna's Crossing is.  Given the opportunity to review book 3 in this series (Amish Beginnings) I decided to go back to the beginning and I boy I sure glad I did. The year is 1737 and a sect of Germans are making the long voyage to begin a new life in America. I even can't begin to fathom what that voyage was like but the author does a great deal of painting a picture with not just the sights but the smells as well.

Told from the perspective of not just Anna and Bairn but also Felix, he added that spark and entertainment to this book, there were many times I couldn't help but smile at his antics.  I liked Anna, she was naïve in some instances but she was determined and compassionate in stark contrast to Bairn who had a chip on his shoulder especially for this sect of passengers. Anna didn't hold back about her faith, believing God would provide and see them through the rough times, which further infuriated Bairn.

This is the first time reading this author and I am quite impressed. Based on an actual ship named the Charming Nancy, captained by Charles Stedman, departing from Rotterdam heading to Philadelphia with a mix of Amish and Mennonite family's. They were seeking freedom to worship in the new land but none were prepared for toil the months at sea would take.

There were some wonderful pages of authors notes where Suzanne Woods Fisher described her research, what she included, what she omitted and why, further piquing my interest in the Anabaptist/Amish community. This whole book deals with the crossing and I'm glad I had read it first, the next book in the series is called The Newcomer and book 3 is The Return both of which I will be reviewing in the next few weeks.

This book was from my personal library, where I can see myself collecting more from this author.
Posted by Margaret @ JustOneMoreChapter at 9:04 PM