Audio Review: The Face of a Stranger by Anne Perry 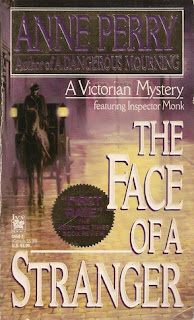 His name, they tell him, is William Monk, and he is a London police detective.

But the accident that felled him has left him with only half a life; his memory and his entire past have vanished. As he tries to hide the truth, Monk returns to work and is assigned to investigate the brutal murder of a Crimean War hero and man about town.

Which makes Monk's efforts doubly difficult, since he's forgotten his professional skills along with everything else...


This book has it been on my TBR pile for a long time, once I found out the author was going to be a presenter at a conference I am attending next month it got boosted closer to the top, then it became an audible 2/1 deal and I jumped at the chance to go that route. Read by Davina Porter I knew I was in for a treat (this is coming after finishing an Outlander book which she also read, it took me a bit to realize that Jamie and Claire weren't going to show up).

It's the 1850's when William Monk wakes up in the hospital, at least they are telling him that is his name, he has no recollection of who he is or anything about his past. Victorian London is brought to life here as Monk manoeuvres his way as a police detective to solve a murder while at the same time trying to discover any info about himself. He is also hiding the fact his memory is gone from workmates and just the general impression he might not have a nice guy.

The Face of a Stranger is a well written mystery and the first in the William Monk series. With vivid descriptions, life during this era is displayed showing not just the distinctions of class but the way of life. The mystery itself was interesting, a decorated English office from the Crimean war is brutally murdered and as Monk digs deeper into the investigation he starts to learn more about himself as well. There were twists and turns and a surprising, yet fitting conclusion. Definitely a series I will continue to read.


This book is part of my 'Reading my TBR 2017 Challenge"
Posted by Margaret @ JustOneMoreChapter at 11:05 PM