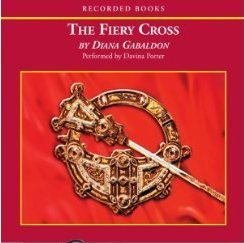 Now, in this eagerly awaited fifth volume, Diana Gabaldon continues their extraordinary saga, a masterpiece of pure storytelling and her most astonishing Outlander novel yet....

The year is 1771, and war is coming. Jamie Fraser’s wife tells him so. Little as he wishes to, he must believe it, for hers is a gift of dreadful prophecy—a time-traveler’s certain knowledge.

Born in the year of Our Lord 1918, Claire Randall served England as a nurse on the battlefields of World War II, and in the aftermath of peace found fresh conflicts when she walked through a cleftstone on the Scottish Highlands and found herself an outlander, an English lady in a place where no lady should be, in a time—1743—when the only English in Scotland were the officers and men of King George’s army.

Now wife, mother, and surgeon, Claire is still an outlander, out of place, and out of time, but now, by choice, linked by love to her only anchor—Jamie Fraser. Her unique view of the future has brought him both danger and deliverance in the past; her knowledge of the oncoming revolution is a flickering torch that may light his way through the perilous years ahead — or ignite a conflagration that will leave their lives in ashes....

Grand, sweeping, utterly unforgettable, Diana Gabaldon’s new novel is riveting entertainment, a vibrant tapestry of history and human drama. Crossing the boundaries of genre with its unrivaled storytelling, The Fiery Cross is a gift both to her millions of loyal fans and to the lucky readers who have yet to discover her.

Audible Audio, Unabridged, 55 hours 34 minutes
Published November 3rd 2011
by Recorded Books (first published November 6th 2001)
***
This is book 5 in the Outlander series and I opted for the audio version. It didn't start out that way, one of my little reading quirks is protecting my books by not breaking the spine, which would have been next to impossible with a 1400+ mass paperback.  But I did try, I began reading and reading and reading some more waiting for something exciting to happen and finally I switched over to the audio book. Like I said it's a big book with the audio coming in over 55 hours in length. Davina Porter is the reader and she is phenomenal, I enjoy every book that I have ever listen to that she has done.  I will admit with this one I put the speed up to 1.25 and towards the end for the last 10 hours I ramped it up to 1.5 just because I wanted to finish this thing.

Was the book that bad? No, it wasn't but it is not one of my favorites. The first book and Voyager (book 3) hold that title. With The Fiery Cross I just found the book rather flat. It chronicles life for the Fraser family as they prepare for weddings and life on the ridge. There were peaks in the storyline where I was thankful for the action and intrigue but they were short lived.

Did I hate the book? No I didn't, Diana Gabaldon has a wonderful way with words,  she knows how to describe, embellish and immerse the reader into the time period. But there were times where some words were not necessary and didn't really add anything to the story.  I also think this book was setting the groundwork for the Revolution and what will happen when the date of their deaths comes around.

I'm not going to jump into the next book just yet, A Breath of Snow and Ashes, it's another biggie coming in over 57 hours for the audio version. Maybe over the long cold winter months I will tackle it.

Posted by Margaret @ JustOneMoreChapter at 4:24 PM