Happy Release Day to Kelly Durham on the release of Berlin Calling.  I was given an ARC but time just got away from me, rather than let the day go by here is a spotlight on Berlin Calling. 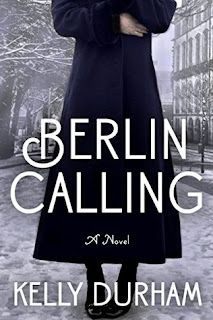 While young and old are captivated by the country’s rapid ascent under the leadership of Adolf Hitler, naive Maggie O’Dea, an American studying abroad, finds her own fortunes turning after falling in love with a handsome soldier and landing a job with the Propaganda Ministry. Embodying the infectious spirit of nationalism sweeping the country, her powerful dispatches launch her broadcasting career as a champion of the Fatherland.

But as Germany invades one peaceful neighbor after another and the wheels of World War II are set in motion, Maggie starts opening her eyes to the grim reality of Hitler’s intentions. Torn between her successful career rooted in the allegiance to her adopted land and a growing dread over her role in a tyrant’s ruthless reign, Maggie—supported by a new love—must fight her own war of conscience. Will she survive a conflict threatening the world…and her own life?