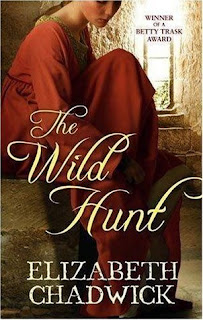 As the marriage begins, Guyon is angry and Judith is terrified. He is experienced in both love and war, and is hostile about marrying this child and surrounding himself with such a nest of political vipers. Judith, having watched her father abuse her mother, expects her own marriage to include rape, beatings, and humiliation. What gradually develops between them is a trust and respect that eventually blooms into a passionate love.

Their story is tightly interwoven with a tenuous political situation as brothers battle for the kingdom and the barons divide themselves between the factions.


I am relatively new to Elizabeth Chadwick in that I have only read three of her books previous to this one. After reading Lady of the English and the first two books in her Elienor of Aquitaine series I was pleasantly surprised when I searched and found a nice stack of books that were unknown to me. Being the weird sorta of person that I am, I decided to go back to the beginning with her first book and work my way through all of them.

The Wild Hunt is book one in the Ravenstow trilogy taking place in 12th century. Most of the author's writing centers around this time period which makes it all the more exciting to read because of her vast knowledge of this era. Her methods of research are quite interesting and I encourage you to check out her website http://elizabethchadwick.com/

It wasn't long for me to get absorbed in this story, I don't need to re-visit what takes place here you can read the synopsis above to get the idea. The Welsh March War is new for me as is reading anything during the reign of King William II.

I have found in reading debut novels that for some authors it takes a couple books under their belt to really make the words flow and the story to develop smoothly. As I've read the last three books that Elizabeth Chadwick has written, going back to her first (of over 20) I can honestly say I feel that her writing was seasoned and just as captivating as it is now. Her knowledge of the time was evident. She drew me into the story and it wasn't hard to feel the emotions, motives and struggles of  Judith, Guyan and his mistress (to name just a few).  I was immersed in the setting and her character development was spot on, right down to the children portrayed here.

Definitely a series I will continue with as well as working my way through the rest of her books. Though I am not a big romance reader, there is enough of it in this book without being overwhelming. The Wild Hunt was the winner of the Betty Task Award in 1994 for first time novelist, a very well deserved award for a great book.

Definitely one I highly recommend!
Posted by Margaret @ JustOneMoreChapter at 2:59 PM