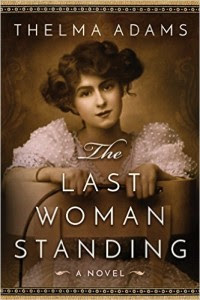 Thelma Adams has built a successful career writing profiles of Hollywood’s biggest and brightest stars. From Julianne Moore and George Clooney to Jessica Chastain and Matthew McConaughey, her portfolio is dazzling and reputation as a film critic in the industry stellar.

Now, Adams shifts from Hollywood to the Wild West with THE LAST WOMAN STANDING, the first biographical novel about Josephine Marcus, Wyatt Earp’s wife, the gutsy Jewish beauty who captured the lawman’s heart in 1881, the year he fought the legendary Gunfight at the OK Corral.

In her well-researched and vividly composed novel, Adams doesn’t waste any time proving her talent as a dynamic writer with a cinematic flair. She explores the brief defining period when Josephine comes-of-age on the American frontier, weaving action, wit, and clever introspection.

The daughter of Jewish immigrants, Josephine shames her tight-knit family (her over-bearing mother begins to sit-shiva the minute Josephine walks out the door) when the 19-year-old follows the smooth-talking and attractive lawman, Johnny Behan, from San Francisco, California to Tombstone, Arizona. Hanging on the slim promise of a wedding, the naïve young woman eventually discovers the older man’s untrustworthy side. She also learns that divided loyalties and corruption plague the silver boom town—with her fiancé at the conflict’s heart. And she can’t pretend she hasn’t noticed the courageous straight-shooter Wyatt Earp who becomes Behan’s sworn enemy.

When Behan betrays Josephine, she leaves him—and immediately faces the harsh realities of being a woman on her own in the Wild West, a world where a lady’s every action depends on a man’s approval. Adams’s storytelling from a female perspective, and her rich and descriptive style, allow the reader to feel Josephine’s desperation as she realizes the only available options she has are prostitution or returning home. That is—until Wyatt Earp declares his love for her. As their romance blossoms and their bond deepens, Behan’s jealousy ignites a rivalry destined for the history books.

I think most people have heard of the Gunfight at the OK Corral, Doc Holliday, Wyatt Earp and Tombstone. But we hear very little of the women during that time. The Last Woman Standing is the story of Josephine Marcus daughter of Jewish immigrants from San Francisco. With the promise of marriage she leaves her home and is lured to Tombstone Arizona with the promise of marriage by lawman Johnny Behan.

This book begins in the last years of Josephine's life, told in first person she recalls the early years of her time in Tombstone and the events taking place which lead up to the famous gunfight and it's aftermath. I love the way Josephine or Jose was portrayed here, she was feisty, determined and stood her ground on matters that were important to her. I think I enjoyed the first half of this book more so as the last bit seemed to have more of a romantic feel to it, not that that is a bad thing.


"Tombstone kicked my ass and I kicked back."

This was my first time reading anything by Thelma Adams and I really enjoyed her writing style. It was engaging and kept my attention. This book is about love, revenge, jealousy and determination (just to name a few).  Reading about lesser-known women in history is always something that grabs my attention and I enjoyed reading that here, showing the things women had to put up with in that time period.  I would have loved to have seen some authors notes at the end just to get a feel for what was fact and what was fiction.

All in all a great read that I will recommend to those that like reading about real historical figures that seems to have been lost to the past. Thank you to TLC book tours and netgalley for a complementary copy of this book for review purposes.

THE LAST WOMAN STANDING is a compelling novel: both an epic tale of an improbable romance and a retelling of an iconic American legend through a female lens. Josephine is a charismatic, fierce heroine who seeks to reinvent herself—and find her soul mate—in a lawless outpost among cowboys and lawmen, where few people are what they seem on the surface. “Adams is that rare, vivid author who brings a cinematic quality to her wildly entertaining fiction.” —Peter Travers, Rolling Stone .

Thelma Adams is an established figure in the entertainment industry. For two decades, she has penned celebrity features and criticism for high-profile publications. Her portfolio of actor interviews includes Julianne Moore, George Clooney, Jessica Chastain, and Matthew McConaughey, among many others.

While covering film for the New York Post, Us Weekly, and Yahoo Movies, Thelma became a regular at film festivals from Berlin to Dubai, Toronto to Tribeca. She sits on the Hamptons International Film Festival Advisory Board and twice chaired the prestigious New York Film Critics Circle.

Her debut novel, Playdate, published by Thomas Dunne Books, won high critical acclaim. Adams is often recognized, as she has been invited to share her expertise on many broadcast outlets, including appearances on NBC’s Today, CBS’s Early Show, and CNN.

She graduated Phi Beta Kappa with a history degree from UC Berkeley and earned an MFA from Columbia University. She lives in Hyde Park, New York, with her family.

Posted by Margaret @ JustOneMoreChapter at 11:15 AM