Review: the things we keep by Sally Hepworth 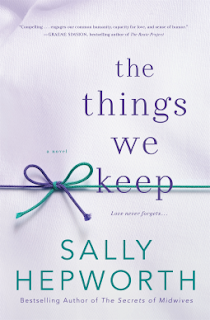 Anna Forster, in the early stages of Alzheimer's disease at only thirty-eight years old, knows that her family is doing what they believe to be best when they take her to Rosalind House, an assisted living facility. She also knows there's just one another resident her age, Luke. What she does not expect is the love that blossoms between her and Luke even as she resists her new life at Rosalind House. As her disease steals more and more of her memory, Anna fights to hold on to what she knows, including her relationship with Luke.
When Eve Bennett is suddenly thrust into the role of single mother she finds herself putting her culinary training to use at Rosalind house. When she meets Anna and Luke she is moved by the bond the pair has forged. But when a tragic incident leads Anna's and Luke's families to separate them, Eve finds herself questioning what she is willing to risk to help them.

Kindle edition, 352 pages
January 19th, 2016, St. Martin's Press
arc from publisher via netgalley
**** 1/2
I finished this book last week, but had to give myself some time to write this review up - it had that much of an affect on me.

Taking on the subject of Alzheimer's is no small task.  It is a disease that we see far to often with its affects reaching past the one diagnosed.

I found The Things we Keep to be a meaningful and compelling story.  Here are 2 adults in their mid 30's when the symptoms start.  There are 3 different POV's here, one of them is Anna, which I found very interesting, the author showed her frame of mind, thoughts and feelings as the disease took a stronger hold on her.  It wasn't hard to feel her confusion. I loved that special relationship with Luke and the way it played out, definitely an eye opener.

The other POV's were from Eve and her young daughter Clem. There was the added time change - Eve's begins 16 months after Anna's which I found unique especially at the end of the book.  Clem is only 7 years old and her young age provided the innocence that meshed well here, especially when interacting with the other residences.

I was totally captivated here, taking only 2 days to read this book.  The authors writing style made it hard to put down.  This is Sally Hepworth's 2nd book, my review of The Secrets of Midwives can be viewed by clicking on the title.


Posted by Margaret @ JustOneMoreChapter at 12:03 AM