Review & Giveaway: Shadow on the Highway by Deborah Swift

Please join Deborah Swift as she tours the blogosphere with HF Virtual Book Tours for Shadow on the Highway (The Highway Trilogy, Book One), from August 25-September 15, and enter to win your own copy! 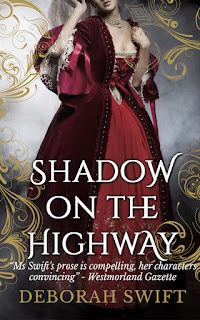 May 1651. England has been in the midst of a civil war for nearly ten years. The country has been torn in two, and the King is getting ready to make his last stand against Cromwell’s New Model Army.

Abigail Chaplin, a young mute girl, has lost her father to the parliamentarian cause. But with her family now in reduced circumstances, she is forced to work as a servant at a royalist household – the estate of Lady Katherine Fanshawe.

Abi is soon caught up in a web of sinister secrets which surround the Fanshawe estate. The most curious of which is the disappearance of Lady Katherine late at night.

Why are her husband’s clothes worn and muddy even though he hasn’t been home for weeks? How is she stealing out of the house late at night when her room is being guarded? And what is her involvement with the robberies being committed by the mysterious Shadow on the Highway?

‘Shadow On The Highway’ is based on the life and legend of Lady Katherine Fanshawe, the highwaywoman, sometimes known as ‘The Wicked Lady’. It is the first book in ‘The Highway Trilogy’.

Book 1 in The Highway Trilogy has two of my favorite elements - young adult and historical fiction.  Deborah Swift is a favorite of mine, I've read all 3 of her books, The Lady Slipper, The Gilded Lily and A Divided Inheritance and am thrilled to be a part of this tour.

Young Adult is a new genre for this author and she has embraced it very nicely.  Coming in around 200 pages it was a quick read, but for this reader I was so engrossed in the story that the time just flew by.

Told from the POV of young Abi (Abigail) during the Civil War in England (17th century).  She is sent by her mother to Markyate Manor where she is met with a grumpy cook and ornery overseer.  To top it off she is to be maid to Lady Katherine Fanshawe, who just happens to be the same age and not too pleasant herself.  Did I mention that Abi is deaf?

I really like the authors writing style, she managed to captured the essence of this time period through her vivid descriptions showing the effects this war had on it's citizens.    The storyline was interesting and unique, how slowly over the course of this book the mystery of Abi's deafness is revealed.  Along with how she ended up being a maid in the first place.  How Katherine turned into Kate and fell for Abi's brother.  There is a lot going on here but in a good way.  Mystery, a touch of romance, hidden agenda's, friendship, commitment, manipulation and more.

The historical notes at the end of the book were an added bonus.  They explained much and confirmed the fact that this author really knows her history and has done her homework.

I think that not just YA but adults will enjoy this book, especially if you are a lover of historical fiction taking place in England (with non royal characters.)


“There is no greater compliment than ‘Give me more!’” – Author Susanna Gregory

“realistic dialogue, an author’s obvious love for history, and characters that leap off the pages” – Romance Reviews Today 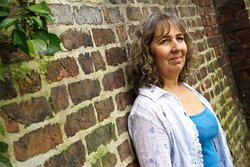 Deborah Swift used to work in the theatre and at the BBC as a set and costume designer, before studying for an MA in Creative Writing in 2007. She lives in a beautiful area of Lancashire near the Lake District National Park. She is the author of The Lady’s Slipper and is a member of the Historical Writers Association, the Historical Novel Society, and the Romantic Novelists Association.